Revolutionary War
War of 1812
York, Edward M. (page 415), a pioneer of Hyde Park Township, who died in 1897, at the age of 75 years, was born at Webster, Me., January 6, 1823, son of John and Eliza York. The early ancestors of the family on the paternal side were of English and Irish blood, and came to America at an early day from England. On the maternal side the ancestry was Scotch and Welch, and one or more were numbered among the Mayflower's passengers who landed at Plymouth, Mass., in 1620. At a later date the York family settled in Maine, where they were established for several generations. In 1855 the brothers moved to Minnesota, viz., William G., Isaac J. and Edward M., and located on farms in Wabasha county, and without doubt members of this family served in both the War of 1812 and the Revolutionary War. Edward M. York was educated in the common schools of the old Pine Tree State and spent his youth on his parents; farm. In 1851 he removed to New Hampshire, where he remained until 1855. He then emigrated west to Wabasha County, Minn., settling on section 31, Zumbro Township, in what is now Hyde Park, the location being four miles northeast of Hammond. There he owned 200 acres of land, and became a prominent citizen, serving for some years as assessor, and for 30 years as supervisor. Politically he was a Democrat. Mr. York married Mary Sinclair, whose parents were natives of Maine, and of this union were born nine children. Three of the children, Jennie L., Isaac and Arthur, died previous to 1884, but the others are still living, namely: Edward N., of Hammond; Dora Ann, wife of Ole H. Olson, of Hammond; Minta, widow of M. J. Muldoon, formerly a grain buyer of Hammond; Elnora L., wife of Charles Wading, of Hammond; Lorinda A., wife of Frank Lawson, residing in Goodhue County; and Estella A., wife of Frank A. Parker, living on a farm three miles south of Goodhue. The mother, Mrs. Mary York, died in January, 1892, at the age of 64 years.

World War
York, Edward N. (page 416), for many years a leading citizen of Hammond, with the development of which village he has had much to do, was born in Manchester, N. H., November 19, 1853, son of Edward M. and Mary (Sinclair) York. He was about two years old when he accompanied his parents to Wabasha County, Minn., this being more than two years before Minnesota became a state, and for the last 64 years he has lived within four miles of Hammond, the farm on which his parents settled being four miles to the northeast of the present village. After attending the district school he took a commercial course in a business college, but remained on the home farm until he was 27 years old. Then coming to Hammond, he entered upon a business career, starting a general store, which he conducted alone for 13 years. At the end of that time William Kruger became his partner, and besides carrying on the store they started the first creamery in this part of the county, which they conducted together for seven years and then sold to the farmers. Mr. Kruger remained in the store business for about four years longer and then sold his interest in it to Adam A. Funk. In the same year Andrew Haggerty, a farmer, joined Mr. York, and Mr. Funk increased the stock and erected the building in which the business is now carried on under the style of E. N. York & Co. The concern handles a general line of merchandise, including dry goods, shoes, groceries and men's and ladies' furnishings. In the fall of 1899 E. N. York was instrumental in organizing the Hammond State Bank, and served as its cashier and president, being still a director. His son Walter is now cashier. Mr. York also served as postmaster of Hammond for 26 years. He was for four years a member of the county board of commissioners, was treasurer of the town of Zumbro for 13 years, treasurer of Hammond Village nine years, school treasurer for many years, trustee of the village two years, and also a member of the school board. During his long and active public career he was never once defeated for a public office, a strong testimony to the confidence reposed in him by his fellow citizens, which is justified by his record. Both in his business and public career he has given the best that was in him to the matter at hand, never sparing himself when there was work to be done, and his efforts have had beneficial and permanent results. For all these things he is respected by his fellow citizens, while his social qualities have also made him personally popular. Edward N. York was married at Alma, Wis., in May, 1882, to Amelia Dodsall, daughter of Mr. And Mrs. Michael Dodsall, the parents being natives of Germany. Of this marriage have been born nine children: Ella E., now the wife of Alfred L. Schuchard, a farmer of Hyde Park Township; Walter E., cashier of the Hammond State Bank; Earl, a traveling salesman; Harry, employed in his father's store, who enlisted in the infantry and served 17 months in France during the recent world war; Francis, a boy possessing musical talent, which he is cultivating; Herbert O., who also enlisted for service in the recent war and was stationed in Tennessee; Raymond, manager of the local telephone company; Ernest, who is in the confectionary business in Hammond, and Arleigh, who is residing at home. 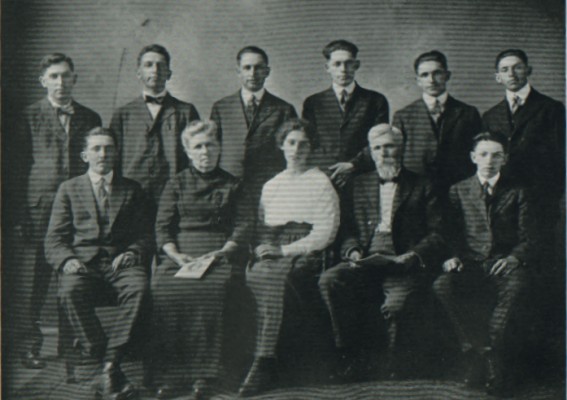 York, Walter E. (page 416), son of Edward N. and Amelia (Dosdall) York, was born in Hammond, Minn., March 22, 1886. His education was acquired in the village school and at Rochester Business College. He subsequently worked for four years in his father's store. After the organization of the Hammond State Bank, he entered it as bookkeeper, and so continued until January 12, 1909, when he was made assistant cashier. On January 14, 1919, he was elected cashier, which position he still holds. He was married June 19, 1913, to Bertha Caspari, whose parents were early settlers in Wabasha County. He and his wife are the parents of one child, Dallas.

Young, Charles (page 738), now numbered among the active and enterprising farmers of Zumbro Township, was born at Eagle Point, Chippewa county, Wis., December 16, 1894, son of Grant Alba and Grace (Rose) Young. The father was a native of New Hampshire and the mother of Wisconsin. Grant Young came to Wisconsin in 1886 and for about five years owned and operated a flour mill. In 1901 he went to Eagle Point, Wis., where he built a store and elevator, operating both until 1910. He then sold out his interests there and removed to Chippewa Falls, where he was president and manager of the Farmers Produce & Elevator Co. until 1914. Since that time he has been engaged in the real estate business in Minneapolis and St. Paul. In 1920 he bought a residence at San Diego, Calif., where he and his wife are now living. They are the parents of five children: Arthur, Charles, Lester, Ella and Ruth. The family are connected religiously with the Methodist Episcopal church. Charles E. Young in his boyhood attended school at Chippewa Falls, Wis., and later the high school in South Minneapolis. In Minneapolis he also took a night course in the Central High School, a course in a business college, and also a course in an engineering school. For two years he worked for his father as bookkeeper, drove a car for the Land lumber Co. one year, and was engaged in logging in Wisconsin for two years. Then for one year he operated a rented farm at Park Falls, Wis., and afterwards for two years was engaged in agricultural work at Beaver, Minn. In 1919 he bought 165 acres in Zumbro Township, Wabasha County (section 34), where he is now residing and carrying on business as a general farmer, raising grain and stock and some garden produce. He is planning early improvements on his place, including the erection of a barn, silo and windmill. Mr. Young was married July 10, 1915, to Mary Altmann, daughter of Mr. And Mrs. Wolfgang Altmann, of Butternut, Wis. He and his wife are the parents of two children: Helen E., born October 28, 1916, and Evelyn R., born April 15, 1918.