The Olpe, or Pleasant Ridge Cemetery, is in the SW corner of Section 34, Township 20, Range 11. The first acre was given as a burial plot by Freeman G. SOULE. His son, Daniel B. SOULE, who died March 24, 1875, was the first to be buried in the plot, according to another son, C. L. SOULE.

The bodies of Orthia P. PRIEST and Marcia E. PRIEST, both wives of L. O. PRIEST, were buried near the PRIEST home and later moved to the cemetery site. The town of Bitler was founded by Daniel and Elizabeth BITLER, J.B. and Ora (there seems to be a difference in the name it is Ora or Opal it is not known which one is correct) WELTY, O.J. and Sarah THORNTON. Date of recording the town site is June 4, 1884, although it had been laid out some time before legally being recorded. The town of Olpe was laid out by F. A. and Elizabeth FLUSCHE in April of 1884, and named for Olpe a town in Germany. The division line between the two towns was the railroad track. Later the town of Bitler was dissolved and the land was incorporated into the town of Olpe.

The cemetery lies one mile to the west of town on a small hill. The Catholic Cemetery (St. Joseph), joins the town on the north and east.

Many of the early settlers of the Olpe area are buried in this cemetery. It is well kept and is still an active cemetery. 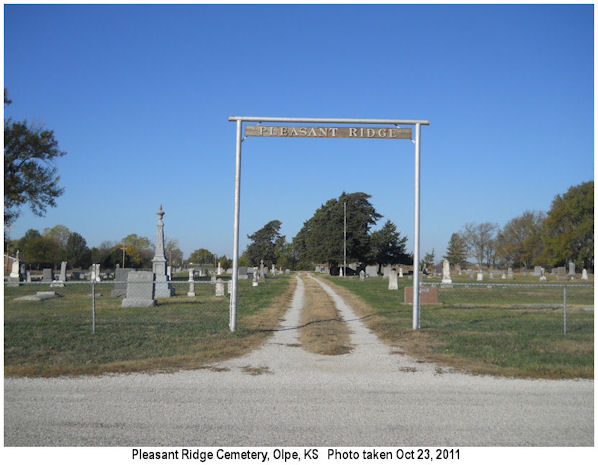