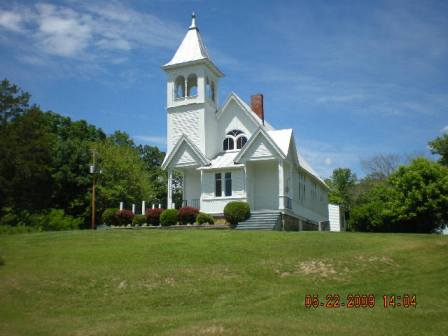 By Rena Worthen & Stephen A. Taylor

View of King Cemetery from inside the first gate

View of area from inside the King cemetery

KING, Betty Via, 85, of Oriskany, died Sunday, May 5, 1996, at her home. She is survived by three daughters, Gladys Anderson, Gayle Hanna and Gay Devinney, all of Oriskany; one son, Gary King of Columbus, Ohio; one brother, William Via of Covington; one sister, Mabel King of Oriskany; 14 grandchildren, and 16 great-grandchildren. The funeral will be at 2 p.m. Tuesday at Oriskany Community Church, with interment in the King family cemetery. The family will receive friends at Boitnott Funeral Home from 7 to 9 p.m. Monday.

FLIPPO, Mary Jane Proffitt, (Janie), of Roanoke, originally of Clifton Forge, passed away Tuesday, September 18, 2001. She was preceded in death by her husband, John Lawrence Flippo, two sons, Jeffrey Lynn Flippo and David Lawrence Flippo, and daughter, Sallie Jane Flippo. She leaves her lovely memories with son, Stephen Mark Flippo and wife, Deborah; daughters-in-law, Linda Flippo and Wanda Flippo ; four grandchildren, David, Michelle, Nikki, and Jessica; three great-grandchildren, Brittany, Lauren, Alyssa; two brothers, O. C. (Buddy) Proffitt and Donald (Priff) Proffitt; sisters-in-law and brothers-in-law; as well as numerous nieces, nephews and friends whom she loved as family. All those who were fortunate enough to be touched by Janie's life will always know her as Momma Janie, a rare person who loved all and in kind was loved by many. Her compassion and caring for others were second to none. Her fun-loving spirit combined with her ever positive outlook on life presented joy to all those around her. She would wish to be remembered with only fond memories and not sadness. An informal memorial service will be held on Saturday, September 22, 2001 at King Memorial Community Church, in Oriskany, Va. at 4 p.m. The family asks that all loved ones gather and bring your fondest memories. In lieu of flowers, please send contributions to the American Cancer Society or the Leukemia Society of America.

Vivian King Lemon, 95, of Oriskany, passed away Sunday, February 13, 2005. She was the daughter of the late Jasper and Katherine Crawford King, and was preceded in death by her husband, William Rodney Lemon; two sons, Walton and Howard Lemon, Sr.; four brothers and four sisters. Vivian retired from the Oriskany Post Office after 20 years service. Survivors include her son, Jerry W. Lemon of Eagle Rock; Jerry's girlfriend, Robin Barton; brother and sister-in-law, Alfred and Mabel King of Eagle Rock; grandchildren and spouses, Vickie and John Ashley, Skip and Diane Lemon, Christine and Joe Monaghan, Amanda and Edwin Dennis; and eight great-grandchildren. Funeral services will be held at 11 a.m., Wednesday, February 16, 2005 in the Eagle Rock Chapel of Botetourt Funeral Home with the Rev. Ray D. Sandifer officiating. Interment will follow in the King Family Cemetery in Oriskany. In lieu of flowers, donations may be made to the Eagle Rock Rescue Squad, P.O. Box 234, Eagle Rock, Va. 24085 or the Fincastle Rescue Squad, P.O. Box 432, Fincastle Va. 24090. The family will receive family and friends Tuesday evening from 7 to 9 p.m. at the funeral home, 14777 Church Street, Eagle Rock, 884-2276.

NEW, Frances Persinger, 70, passed away November 15, 2000. Mrs. New was a teacher in the Head Start Program for 15 years, and a member of Cross Roads Christian Church, New Castle. She was preceded in death by a sister, Winifred Smith. She is survived by her husband, Bobby New of New Castle; three daughters, Jeanie Drummond of Eagle Rock, Dianne Barrows of Chesapeake, Frances Vassi of Goodview; one sister, Geraline Shuff of Covington; six grandchildren; two great-grandchildren. There will be a memorial service Friday, November 17, 7 p.m. at Paitsel Funeral Home, New Castle. The family will receive friends at the home of Bobby New.

Ruby C. Harlow, 78, of Oriskany, passed away Sunday, May 14, 2006. She was preceded in death by her husband, Warner Moore Harlow; parents, Paris and Pearl Craft; and sister, Ruth Craft. She is survived by children, Shirley and Kenneth Wertz, Junior and Bonnie Harlow, Larry Harlow and Amy Ward, Kathy and Walter Musgrove, Patricia Ferguson, William and Teresa Howell and, Roger and Penny Spangle; 16 grandchildren; 19 great-grandchildren; brothers and sisters-in-law, Lloyd and Judy Craft and Arthur and Carolyn Craft; sisters, Edith Radford and Edna Wolfe. Funeral services will be held 2 p.m. Wednesday, May 17, 2006 at King Memorial Church, Oriskany with the Rev. David Cox and Gary Brown officiating. Interment will follow at King Memorial Cemetery. Family will receive friends 6 to 8p.m. Tuesday at Paitsel Funeral Home Chapel, New Castle. In lieu of flowers, donations may be made to Paitsel Funeral Home to help with funeral cost.www.paitselfh.com

Persinger, Fulton A. side view of stone

Long walk up to the cemetery

Grave with funeral home marker & flowers with no name or date

Grave with funeral home marker with no name or dates