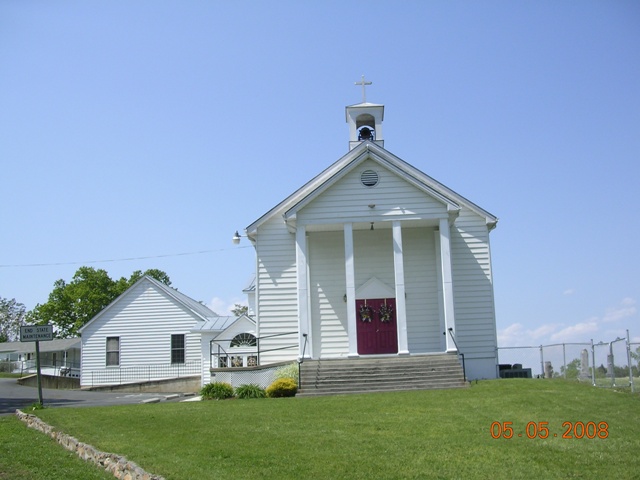 Copps Cemetery is to the right as you go up to the church. This cemetery is quiet old and many of the markers are unreadable at this reading.

Photos are provided by Dick and Jane Taylor.

another view of above stone

Stone with only “Our Baby” on it

Linkenhoker, can’t make out what is on stone

Haynes, Joseph can’t make out what is on stone

Young may be a footstone

stone off base can’t read it

Camper, James F. 1869 – 1929 & Camper, Rosa L. 1873 – 1942 Obit printed Thursday November 26, 1942 Fincastle Herald as follows: Mrs. Rosa Thrasher Camper 69, widow of the late James F. Camper of Buchanan died at her home Monday. She is survived by ten children and 25 grandchildren. Funeral services were held at Copp's church at Springwood Wednesday at 11 AM. Burial was in the church cemetery.

View of Cemetery & Side of church

View of corner of cemetery

View of front of church

view of side of church and parking lot

View of cemetery from parking lot

Rock with “To Cultivate a garden is to walk with God”

Close up of A. M. Hayth’s stone

Headstone sinking into the ground

another stone sinking into the ground Young

another stone can’t make out

Stone beside a cut down bush

Almost buried Stone inside a cut down bush

In trying to type the information on these photo’s I did use the Botetourt Cemetery Book # 2 – by Rena Worthen and Margaette Tynan.

I have tried to get the information as good as possible – Please forgive any mistakes – and should you find a mistake please email either Rena or Steve.