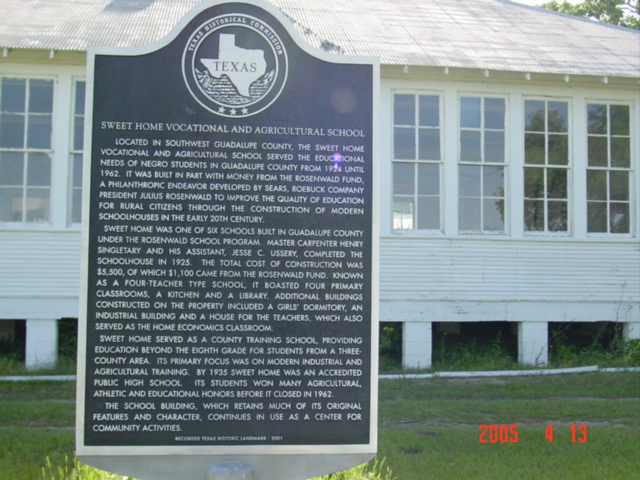 Sweet Home Vocational And Agricultural School
Located In Southwest Guadalupe County, The Sweet Home
Vocational and Agricultural School Served The Educational
Needs of Negro Students In Guadalupe County From 1924 Until
1962.  It was Built In Part With Money From The Rosenwald Fund,
A Philanthropic Endeavor Developed By Sears, Roebuck Company
President Julius Rosenwald To Improve the Quality Of Education
For Rural Citizens Through the Construction Of Modern
Schoolhouses In the Early 20th Century.
Sweet Home Was One Of Six Schools Built in Guadalupe County
Under The Rosenwald School Program. Master Carpenter Henry
Singletary And His Assistant, Jesse C. Ussery, Completed The
Schoolhouse In 1925.  The Total Cost Of Construction Was
$5,500, Of Which $1,100 Came From the Rosenwald Fund, Known
As A Four-Teacher Type School, It Boasted Four Primary
Classrooms, A Kitchen And A Library.  Additional Buildings
Constructed On The Property Included A Girl's Dormitory, An
Industrial Building And A House For The Teachers, Which Also
Served As The Home Economics Classroom.
Sweet Home Served As A County Training School, Providing
Education Beyond The Eighth Grade For Students From A Three-
County Area.  Its Primary Focus Was On Modern Industrial And
Agricultural Training.  By 1935 Sweet Home Was An Accredited
Public High School.  Its Students Won Many Agricultural,
Athletic And Educational Honors Before It Closed In 1962.
The School Building, Which Retains Much Of Its Original
Features And Character, Continues In Use As A Center For
Community Activities.
Recorded Texas Historic Landmark - 2001 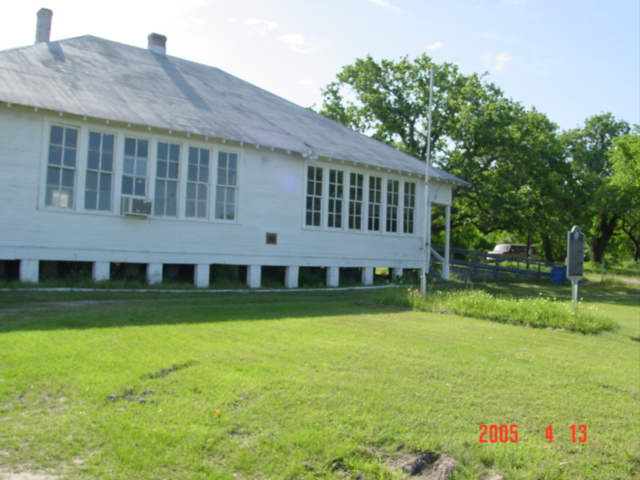 SWEET HOME COLORED SCHOOL. Sweet Home Colored School, an industrial training school for blacks, was on Route 3 in Seguin, Texas, in Guadalupe County, an area settled mostly by African Americans.qv It had three teachers in 1917, and several students transferred to the school from other districts. The school offered manual training and domestic science, plus the regular curriculum, and maintained a small farm with experimental garden plots. The complex of frame buildings included a teachers' cottage, a church, a school building, a blacksmith shop, and a bell tower from which a bell was rung each morning at 7:30 to begin the school day. George Washington Brackenridgeqv was said to have been a contributor to the school's support. By the 1934-35 school year Sweet Home Colored School had an enrollment of 134 pupils, and a faculty consisting of one full-time teacher, and two part-time instructors. The principal was A. R. Mills and the school superintendent, M. H. Weinert.

SWEET HOME, TEXAS (Guadalupe County). Sweet Home is a mile west of Farm Road 467 eight miles southwest of Seguin in southern Guadalupe County. It was established by former slaves before 1877. In the early twentieth century Sweet Home was the site of a two-story industrial school for blacks. A church, a school, and several scattered houses appeared on the 1946 county highway map. Forty residents were reported in 1988 and 1990.