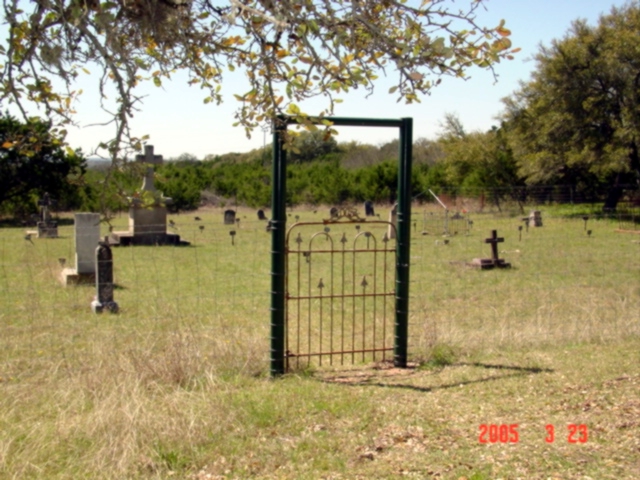 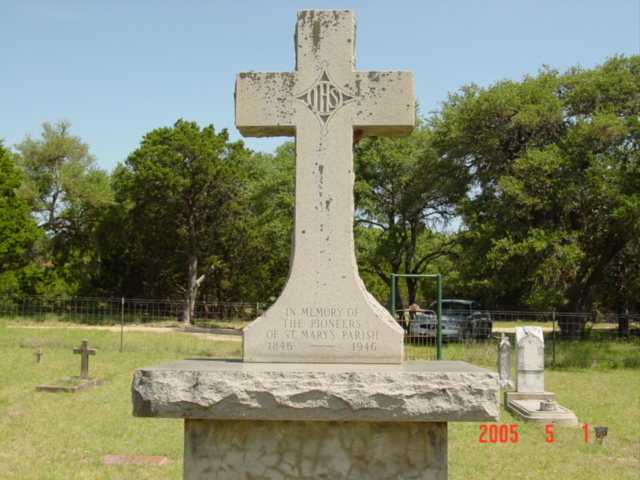 This is a very old cemetery located on Memory Lane.  A lot of Funeral Home Markers on graves that can't be read.  A few originial tombstones on some of the graves.   They are in poor condition..some broken and unreadable.   The Church is in the process of putting small granite markers on each grave.  Found 35 unreadable/unmarked graves.  Cemetery is enclosed in a fence.  Grass needed mowing.   This is a partial listing.


Surveyed by Faye Herbort <fherbort@moment.net> and Cynthia Phillips <cynthiap@ktc.com> on 17 Mar 2005
Notes and Pictures were provided by Wanda Qualls.   More will be taken at a later date. If you have anything to
add to the notes contact me Donna Schulte Loth

Note 2:
Valentin and wife, Catharina, had three children: Katharina, Martin and Maria.  Katharina married Johann Blank and after his death married Anton Novian.  Johann married Maria Raulz.  Maria born 1842 died about 1850 as she was not listed in the 1850 census.

Note 3:   1850 Census
Theresia Herbort that is buried in this cemetery is the matriarch of the whole Herbort clan in Gillespie Co. every Herbort descendant comes from her three children. They were the only Herbort's to settle in Gillespie.  Faye Herbort

Note 5:   The Speier listed above is probably Johann Speiers father.
Johann Speier  married Anna Petsch on Apr 26 1865.  He was listed in the 1860 census as Speyer living with his father Henry Speyer.

Note 6:  The book Bremer and their Kin in Germany and in Texas by Robert R. Robinson on pg 1396 mentions Johann Heinrich Conrad Stuenkel of Metel, Hannover accompanied by his wife Johanna and two children named Dietrich and Maria.

Note 10: Listed in the 1860 census was Wendelin Mittel age 48 from Baden Germany.  With wife Mariannne and son Joseph and daughter Marianne.   Also listed in the Census is William Mittel age 36 from Baden with wife Margarethe and daughters Mary and Catherine and son Wendelin.  In the 1850 census Wendelin had no children. and William was not listed.   William Mittel married Margaretha Wuest on Sep 09 1858.

Frederick and his wife were from Cadenbach, Germany.  They immigrated with children Anna, Nann, Jacob and John. They arrived aboard the "Rigs" on Jan 04, 1846. Anna married Heinrich Jordan Sep 28 1847.  Nann married a Teamster.  Jacob married Anna Marie Trum in 1847.  John's wife was Gertrude Stein. In 1853 Fredericks children; Peter and wife Anna and Anton and wife Katherine Metzger Baumann; arrived in New Orleans and came to Gillespie County.   Daughter of Peter; Catherine and Anna; were attacked by indians.  Catherine was murdered and Anna was taken captive.  She managed to escape and was reunited with her family.  There may be some Trum family members in this cemetery as they died before Anna Marie married Jacob. One reference said that Fredericks wife died in 1850 but she was in both the 1850 and 1860 Census with her daughter Anna and husband Heinrich Jordan and may be the Elizabeth Catherine Metzger who is buried in St. Mary's Catholic Cemetery who died in 1875.

Maria Barbara Monsieur Meurer is my gg grandmother.  She was born on September 29, 1801 in Grüninger, Germany.  Her parents were Herman Joseph Monsieur and Maria Barbara Kochlein.  She married Johann Meurer on April 1, 1823 at Heiligenroth bei Montabaur, Germany.  She died December 26, 1862 at Fredericksburg.

Catherine Louisa Meurer was born April 10, 1863 to Peter Blasius Meurer and Anna Maria Josephine Kunz.  She died on February 16, 1869 at Fredericksburg.
I do not have any Wilhelm Meurer listed.  I do have a Wilhemina Meurer with the same dates of birth and death being born to Adam Meurer and Margareth Kunz.
She was baptized on December 7, 1871 at St. Mary's Church.
The husband of Barbara Meurer and three of their children died in 1848.  The children who died were Johann Jacob, born October 14, 1829.  Susanna, born March 6, 1832.
and Joseph, born in 1833.  All were born in Heiligenroth bei Montabaur, Germany.  Margaretha Meurer Schandua died in 1849 during the childbirth of her first child.  The child also died.  Her husband was Peter Schandua.
Most of the information came from micro-film tapes that I have on permanent loan at the FHC of the Mormon Church here in Slidell.