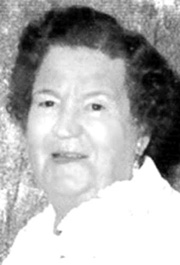 CROSBYTON - Graveside Services for Ruby Bales, 89, of Crosbyton will be at 10 a.m. Friday, Aug. 6, in the Crosbyton Cemetery with Terry Ellison and Joseph Johnston officiating. Arrangements are under direction of Adams Funeral Home of Crosbyton. She died Wednesday, Aug. 4, 2004, in Crosbyton.

She was born Dec. 12, 1914, in Wisconsin to Martin S. and Matilda Nelson Carson. She married Everett W. Bales on May 5, 1933, in Fairview, Texas. He preceded her in death on Nov. 9, 1992. She was a member of the Church of Christ and the Crosbyton Chamber of Commerce. She owned and operated the Bales Motel in Crosbyton for 53 years and for a time had worked as a dirt contractor and farmer. Her hobbies included gardening, sewing and quilting. She was named Miss Crosbyton 1933. She lived in Crosbyton most of her life. Her son Donald "Bud" Bales preceded her in death on Jan. 19,1996.

This site may be freely linked to but not duplicated in any fashion without my consent.
The information on these pages is meant for personal genealogical research only and is not for commercial use of ANY type.