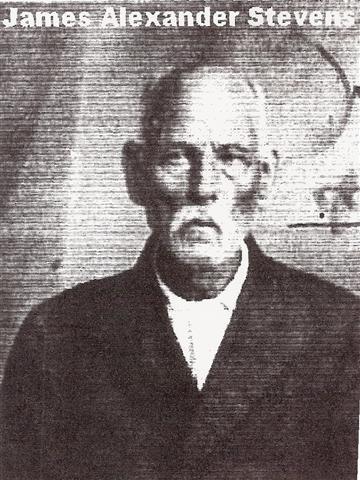 James  Alexander Stevens was born February 11, 1846 in Harris County, Georgia. He was  the fifth child of Fleet Cooper Stevens and Elizabeth Ann Dorrough.The census of  1850 shows that James  is about 4 years of age. He is living with  his parents in District #19, of Harris County, Georgia. His father was a farmer at this time. The land that the family owned was valued
at  $450.00.  He is also living by his grandparents on his mother's side of family; Joseph T. and Jane  Dorrough. The Dorrough Family has at least 13 children. James' grandfather has an estate valued at $3500 .00 at this time.

The next family record found was the 1860  census when James is still living in the home of  his parents in  Shelby County, Alabama. He is about 14 years of age at this time. Fleet Cooper  Stevens, his father has a real estate value of $2500.00 and a personal  Value of $2500.00.  His father's occupation is listed as a farmer. The Dorrough family has also, moved with the
family in Shelby County, Alabama. They are again living next door.

Harder times are to come.  On January 06, 1864, James Alexander Stevens and his brother, Joseph Theophilus, enlisted into the 18th Alabama Infantry of Company C. After only 10 days   (January 06, 1864) of  service,  he was one of the 100 that were captured in Franklin, Tennessee.  James was only 17 years, 10 months and 26 days of age at this time. We are  unsure of his
brother's capture but we know that he came back from the war and  moved to Texas later on in his life.

Olan ( grandson) remembered his grandfather's account while he was a prisoner. He was told that the prisoners were herded into trains like cattle. Prisoners were sick, wounded, some screaming in pain, some dying, and he remembered that the stench was horrible. He remembers that they had  little food and some of their clothing was taken away from them for the Union
Troops. They were cold, hungry and sick.

Then they were sent to the Union camp of Chase, Ohio. ( See below the article on the conditions of Camp Chase.)  James Alexander, said that due to over crowding every day they would have to go into the yard. The Union soldiers would have a pile of pebbles. All the prisoners were required to pick up a pebble and turn it over . If their pebble had an X on the bottom, they would be shot that day. James Alexander said that he had drawn an X on his pebble and he was waiting to be shot. That day, they got word that the war was over, so he was spared.

One year, 3 months, and 16 days after James' capture the prisoners were engaged in a prisoner exchange. This exchange occurred at Vicksburg, Mississippi. He was released with his rank  noted as being a Private. James recalled that when he was released he had to walk from Mississippi to his home in Alabama. He remembered being barefooted . The Union soldiers had taken his shoes. He remembered that his feet were cut and bleeding. He found some feed sacks and a rope and tied them around his feet. He continued home. He came home in such bad physical and mental condition that when he came up to his home his mother didn't recognize him.

In 1870 James is now 24 years of age. He is living at the  P.O. of Shelby Springs, in Shelby County, Alabama. There he is living with his brother Fleet Cooper Stevens. His brother's occupation is listed as a farmer. His brother has a wife and 2 children. James is employed as a farm laborer there. James' mother and  father live also in Shelby county, but at  the
Hillsboro P.O. His father has now become a Baptist preacher.  The family surname is misspelled as Stephens instead of Stevens on this census.

On June 16, 1874, they are blessed with their first child which is a daughter. They named her Annie Elizabeth (Annie). They are naming her after James' mother Elizabeth Ann. Then on May 13, 1876 their second  child and first son is born. They name him after James' father calling him Fleet Cooper Stevens (Fleet). Within the next 19 years they would  have 9 more
children. Annie, Fleet, and James were born in Cumberland County,  Sumner, Mississippi. Sarah Della was born in Webster County, Mississippi.  John will be the first of their children to be born in Texas, followed by the births of Will, Hedley, Charles, Lillie, Carrie, and Effie. This made James Alexander & Eliza Jane parents of 11 children. These children were 5 daughters and 6 sons.

On  the June 11, 1880 census, the family is shown to be living in Cumberland, Sumner County, Mississippi . Eliza Jane is 4  months pregnant . Annie is 6 , Fleet is 4, and James David is 2 years old.  James' occupation is still listed as a farmer. It notes that Eliza Jane can't read or write. James can read and write. James and his family move to Webster County, Mississippi within the next 5 months. Their 4th child Sarah Della is born there (November 12, 1880 ).

On May 04, 1892, James & Eliza Jane submited letters of their faith to the Union Primitive Baptist Church of Lamkin, Texas. This letter was from the Shiloh Church of  Leon County, Texas. They were accepted, and James was elected as a clerk. On July 1892 , he helped to put into place the adopted Articles of Faith and Rules of Decorum which were written into the
records of the Church. In June 1898 James was ordained. He served faithfully throughout the remainder of his life.  In 1912 the Old Lamkin Church was torn down. The present Union Primitive Baptist Church structure was erected on the same site. James' son,  John, and daughter in law donated the grant of land.

June 23 , 1900, the family is found on the census in the Justice Precinct #3 in Comanche County. His occupation is listed as a farmer. In the home are James, Eliza Jane, James D., Sarah D., John, William T., Aaron H., Charlie L., Lillie A., Caroline A., and Ethel O. Those not in the home are Annie and Fleet.  All family members can read and write including Eliza Jane.

April 29, 1910 census shows James, Eliza Jane,  Della,  Charles L., Lillie A., Carrie A. and Ethel O. are all in the home. James' occupation is still a farmer. He owns his home and it is debt free. His home is identified as being on the Comanche and Gentry Road. His name is listed as Jim A. Stevens.

January 27, 1920 census shows that James, Eliza Jane, and Effie are the only ones in the home. Their beloved sister, Sarah Della, died only 3 months and 24 days before ( October 03, 1919). Della was the first of James and Eliza Jane's 11 children to die. Sarah lived to be 38 years, 10 months, 11 days of age. She was never married. The family still lived in Justice Precinct #3 . The road was labeled as being on the Comanche Hamilton, North Road , in the village of Lamkin.  James was noted as owning the farm. He was also, noted as being a farmer .

On February 03, 1926 in Comanche County, Texas, James filed a soldier's application for a pension. His application states that he was honorably discharged. It states his enlistment,  capture, exchange and parole. His name was not found on the unit's muster roll so James had to confirm his enlistment.  He had to get affidavits from several that could confirm his enlistment. His brothers F. C. Stevens and J. H. Stevens signed the affidavits. W. L.Davis and W. H. Herren stated that James was a creditable citizen.  The state and county assessor confirmed the value of James' homestead as being $2,750.00. His application was approved 12 days later on February 15, 1926. He was granted a back pay for December 01, 1925 to the current date of  being on February 15, 1926.

April  03, 1930, Ethel O. (Effie) is listed as the head of the home. Effie is 33 years of age, James is 84, and Eliza Jane is 73. Effie's occupation is listed as a farmer. James and Eliza Jane's sons, Fleet and Will, and their daughter, Lillie, live only a few houses down from them.

Della Fay ( granddaughter) remembers little about James, but that when he wanted to talk to her, he would get his cane and pull her up to him with the hook . She also remembered that one day she saw him take his cane and put it out into the yard . He set it upright into the ground . She remembers that she was playing. Della remembers that she started to pull the cane out of the ground for him. He promptly told her to leave it there so that he could tell what time it was. So, he  must have used it as a poor man's sun dial.  James and Eliza Jane were well  known in the Lamkin area. James was known to be a farmer and a blacksmith. He also would make caskets. Eliza Jane with her sewing skills would make linings and embellishments for them.

James and Eliza Jane were some of our early pioneers. Both worked together and sometimes they worked apart. Times were hard, even the land at times was unyielding.  I find that they were living  the best that  they could one day at a time. They pushed on to bring the family together and fulfill the family's many needs. The focus of their life was doing God's will, loving
family and others. They demonstrated these characteristics by their lives until their death. 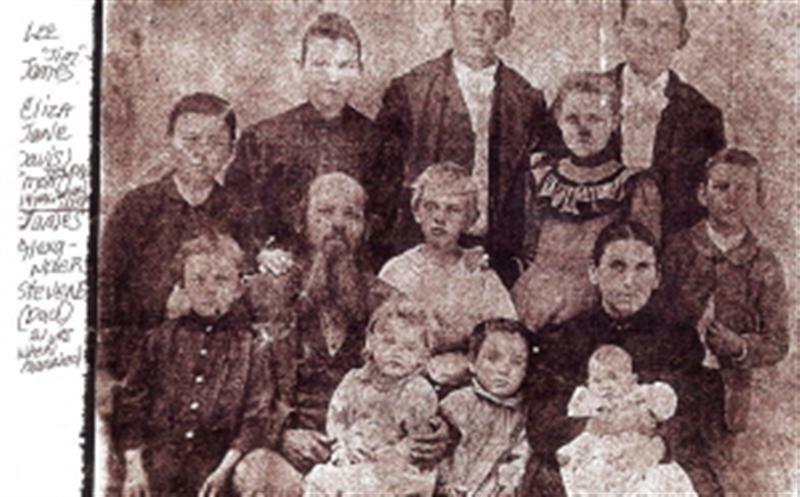