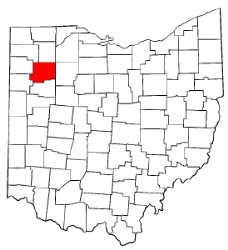 This site is dedicated to helping you with your genealogical research.
Putnam County was created in 1820 from Shelby County and was attached to Wood County for judicial purposes.  When Williams County was organized on February 2, 1824, Putnam was detached from Wood and attached to Williams County.  Putnam County was organized by  the Ohio Legislature Act of January 3, 1834 to take effect immediately.

The County was named in honor of General Israel Putnam, a native of Massachusetts and a prominent early military man.  Some Native Americans still remained in the area after the white settlers, which included Germans and Swiss, moved into Ottawa, the county seat.  Ottawa is the site of an ancient Indian village, Tawa Town, from which it takes its name.

Putnam county is located in the northwest area of Ohio, bordering on Van Wert,  Paulding,  Defiance,  Henry,  Hancock and  Allen Counties. The northeastern corner of Putnam borders the southwestern corner of  Wood County.

* * * *
If you have submitted information or files to this site and have changed your e-mail address, please inform your county coordinator of  your new email address.
Thank you.