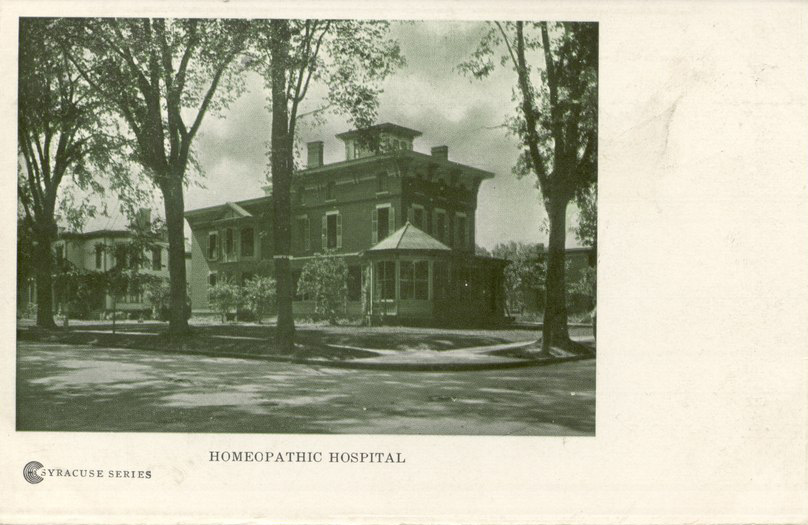 In 1906-1907 the Homeopathic Hospital building of reinforced concrete with sand lime brick exterior and litholite trimmings, was erected in East Castle street, adjoining the old homestead used for hospital purposes at South State and Castle streets.  The Eastern Concrete Steel Company of Buffalo was the contractor.  The floors were laid with tile and concrete, six inches thick with stairs of the same construction.  The spacious building on the southwest corner of Seymour and West streets was first used for hospital purposes.

Onondaga County Medical Society, 1906-1956, The Onondaga County Medical Society?, Syracuse? 1956, pg. 60. General Hospital was chartered in 1895 and opened in 1896 as the Syracuse Homeopathic Hospital with fifteen beds in a frame building in South West Street.  Over the years it has been expanded both in size and services -  now 153 beds including bassinets and moved to its present location in 1903.

In 1921 the staff was opened to graduates of both schools of medicine and the name changed to General Hospital of Syracuse.

The most recent hospital expansion and remodeling was done in 1943-1943.  The School of Nursing was established in 1899.  Both hospital and school are accredited by national and state organizations.

Soon after the opening of the Syracuse Homeopathic Hospital on January 1, 1897, the executive committee of the staff appointed young ladies as probationers, some of whom were later appointed student nurses.  Within a few weeks a course of lectures was arranged and systematic instructions inaugurated.

On March 13, 1899, the Training School for Nurses of the Syracuse Homeopathic Hospital (later to be called General Hospital of Syracuse) was incorporated and in June of the same year was approved by the Board of Regents of the New York State Department of Education.

A total of four students a year could be admitted to the school and no applicant under 23 years or over 35 years was accepted.  After a satisfactory probationary period of two months, the student signed an agreement to remain in the school for two years and to obey the rules of the school.  She received eight dollars a month for the first year and ten dollars a month for the second year.

The hours of duty were from 7 a.m. to 7 p.m.  Each student had one afternoon off a week for recreation and was expected to take one hour for out-of-door exercise and change.

Classes given by the staff physicians and the superintendent were held in the evening and included the following subjects:


The question of additional experience for students became a serious problem and in order to solve the problem, students were sent to homes to do private duty.  Two dollars a day was paid for the student's services.

From this beginning the school has grown and to date has graduated 593 students.

Students enter in September of each year and the course is three years in length.  They have a total of approximately 1256 hours of formal classroom instruction, which includes lectures, recitations and laboratory experience.  In addition to classroom instruction, they receive approximately 106 weeks of clinical experience in Medicine, Surgery, Obstetrics, Operating Room, Pediatrics, Communicable Diseases, Psychiatry and Diet Kitchen.

Hours of duty are 40 a week including classes.