Here is a picture of the church and country school adjacent to the church. The school is utilized by the church for classes and so forth. My Aunt Laura Dickinson was a teacher in that school about 1935-36.

There use to be sheds for horses and carriages, all behind the church. I remember them being used at church activities outside. I have a picture of one of the sheds, all the others are torn down. This church serves probably a three mile radius of local residents from Oswego County and Onondaga County.

Many of the local families are descendants of the residents from the early 1800's. I have pictures of the church windows and information on who presented them. These date back to mid-1800's.

Photo of the sheds that were located behind the Little Utica Church whose purpose was to house the horse and buggies during church services. Originally there were six or seven of these building attached together.  In the 1940's, ice cream socials, games, and other outdoor social events were held in these buildings also.

Photo of SOS class of 1925.  These are young people whose teacher was Mable Scriber and she taught this class through the 1950's.  To be a member of the SOS class one had to be high school age or at least 14 years of age. SOS stands for Serve Our Savior.

This picture is of the Little Utica Sunday School Class of 1938.
This church bulletin records the dedication services to honor the men who served in World War Two that took place in the Little Utica Church August 24, 1947.  These men lived in Little Utica and Lysander.

The oar, William Fancher and Eunice

To the Glory of God in loving memory of

Presented by the SOS class 1927 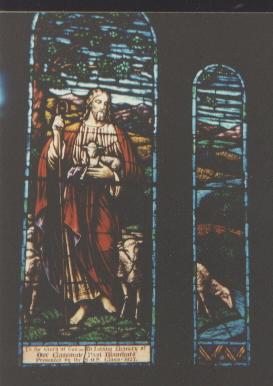 Note on some of these families.