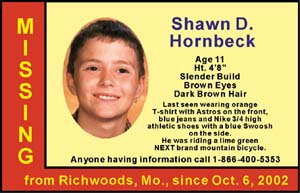 [The following article was "borrowed" from Save the Children web site.   Also, Gina's name is a link which will take you to another website with more information.]

Two 12-year-old boys heard her screams for help, and saw a battered station wagon speed off.

Nine years have passed since Gina was snatched off her bike on the normally quiet streets of Fredericktown, Mo., disappearing into the dark without a trace.

The billboards and posters seeking information on Gina may be down, but that doesn't mean people -- or police -- forgot.

Investigators kept searching, and now have charged two men they believe abducted her that night of Aug. 5, 1989.

Williams is a convicted child rapist already serving a 30-year sentence without parole in the state penitentiary.

Bellew lives with his parents on a heavily wooded 96-acre plot about 10 miles south of Fredericktown.

Gina is feared dead, but her remains never have been found.

Investigators believe the petite eighth-grader may have been killed and her body placed in an abandoned freezer and buried somewhere on the Bellew property.

The first-degree murder warrant charged Williams with cutting the girl's throat. He could get the death penalty upon conviction.

Bellew was charged with second-degree murder, and was being held in the Madison County jail.

Williams long had been a suspect, but the case apparently came together two months ago when an informer gave investigators Bellew's name, and he made statements incriminating Williams and himself, sources said.

Sources said Bellew told investigators he met with Williams several hours after Williams had abducted Gina, and the girl was in his vehicle. Bellew said he saw Williams kill Gina, and the two men then placed her body in the freezer that had contained spoiled deer meat.

Investigators said Bellew provided details that only the girl's killers would have known, and they were corroborated by other sources.

Bellew was convicted in 1990 for sexually assaulting a 7-year-old girl. He got a five-year sentence.

After being paroled, he got into trouble for burglary, auto theft and setting a mattress on fire in the Madison County jail.

Through dozens of interviews over the last two years with friends, acquaintances and ex-girlfriends of Williams and several convicts who have served prison time with him, Pappas and others in law enforcement are convinced that Williams and various associates have committed many murders.

"Without the footwork of Chris Pappas this case would not have come together," said Keith DeSpain, Fredericktown chief of police. "He did a tremendous amount of work."

A lawyer who knows Williams once told Pappas -- in a conversation that Pappas taped -- that Williams had told him he was responsible for 11 murders, including Gina's. The lawyer also said that Williams told him he could "mark the spot with an X" where she was buried.

Williams allegedly cut the girl's throat sometime after abducting her the night of Aug. 5, 1989, according to the warrant, filed in Fredericktown.

Williams could face the death penalty if convicted.

The FBI, using state-of-the-art underground probing tools, have been unable to find the freezer, which had been originally discarded by Bellew's father with spoiled deer meat inside.

Bellew's parents said in an interview that Pappas and other investigators mistreated their son, roughed him up and coerced a false confession, since he became a suspect about six weeks ago.

"The FBI promised me that nobody would put a hand on him, but Pappas choked him and slapped him, and another detective kicked him," said the defendant's father, Ralph Bellew, 64, a retired tool and die maker.

Pappas and other officers deny those accusations.

The suspect's mother, Teresa Bellew, 57, said that a psychiatrist has said her son has the mental capacity of a 12-year-old.

Bellew has a younger brother and a younger sister, plus four half brothers and half sisters.

The Bellew family lives in a plain, single-story, gray frame house on a 96-acre tract. The house is connected to the main road, about a mile and a half away, by a rough, rocky lane.

The house is surrounded by hundreds of empty soda cans, discarded tires, an abandoned kitchen stove, stacks of wood and rusted farm equipment.

The parents said that their son confessed to a portion of the crime so the investigators would leave him alone.

"Believe me, if my son knew where her body was, he would have told them," said Ralph Bellew. "He can't keep his mouth shut."

Pappas, 42, has been a St. Louis homicide detective for 12 years.

He had never heard of Williams until the summer of 1996, when Capt. Dave Heath, the homicide division commander, asked him to re-examine a 1975 case -- the unsolved murder of a volunteer social worker from Connecticut.

The victim, Laura Michele Dinwiddie, 23, had been stabbed to death in her apartment in the 3900 block of North 21st Street.

Heath had received a moving letter from the victim's mother, prompting him to have Pappas look at the case.

That attack happened one month and one day after Gina's abduction.

On April 3, 10 days before the trial was scheduled to start, County Prosecutor Robert P. McCulloch dropped the charge, saying that the case had deteriorated due to changing stories by witnesses.

While investigating the Dinwiddie case, Pappas became convinced that Williams and another man, Bryant Squires, had abducted Gina.

Squires died of cancer in 1996, and in a deathbed confession he told two nurses that he and Williams had abducted Gina and that Williams had killed her.

Squires also said that he and Williams had participated in several other ghastly crimes as well.

The second-degree murder charge was dropped against Bellew. But it wasn't dropped because authorities believe he was not involved in Gina's killing.

According to a statement by Dwight Robbins, the Madison County, Mo., prosecuting attorney, the charge was dismissed so that federal authorities in Cape Girardeau, Mo., can more easily proceed with a newly filed charge against Bellew: making a false statement to the FBI during its investigation of Gina's disappearance.

Bellew was indicted on the lying charge by a federal grand jury and he appeared before a federal magistrate in Cape Girardeau. Authorities were hoping to have Bellew confined without bail.

Authorities said Bellew knowingly lied last year when he told investigators that Gina's body was buried under a hog pen and told them another time that she was buried in an abandoned freezer on his father's property near Fredericktown, Mo. Extensive searches came up empty.

Robbins, the prosecutor, said the murder charge against Bellew could be reinstituted at any time.

Williams took a lie detector test and "failed miserably" when asked questions about Gina, a source close to the investigation said.

Results of Polygraph tests are not admissible in court.

Williams' attorney, Joel Schwartz, would not comment on the test or the case. In the past, he has said his client was not involved in Gina's disappearance.

*Eyewitness testimony from a man, now living in Houston, who says that on the night Gina disappeared, he saw her looking worried and sitting with Williams in the back seat of a station wagon at a campground near Fredericktown. The campground is along the St. Francis River. The driver of the station wagon was Bryant Squires, a close friend of Williams.

*A death bed confession from Squires, who died of cancer in St. Louis on Sept. 18, 1996. Squires, 37, also was suffering from AIDS. Squires told two nurses that he and Williams had kidnapped Gina and that both men were responsible for other crimes, too.

*Evidence that Gina bit Williams while she was being sexually assaulted and evidence of Williams' subsequent treatment of the wound.

*Testimony from several of Williams' former friends, including cellmates, who said he told them details about kidnapping Gina. Some statements include information about items of Gina's clothing that only the killer would know.

*Testimony that Williams had taken notice of Gina on at least two prior occasions, when he was visiting friends in Fredericktown.

Williams has denied any knowledge about the abduction of Gina, however he failed a lie detector test.

"I've never even been to Fredericktown," Williams said. "Been past it on my way to Poplar Bluff, but have never really been there. I don't know anything about the case."

"Williams' brother had a close friend who lived very near to Gina Dawn," one of the law enforcement investigators in the case told the newspaper.

"Williams made frequent visits to Fredericktown, and we now have information that Williams had taken notice of Gina on at least two different occasions."

The investigators, who spoke to a reporter on the condition that their names be withheld, said they were determined to build a death penalty case against Williams, even though Gina's remains have never been found.

"We're conducting an aggressive investigation and are extremely close to being able to present this for prosecution," one of the investigators said.

Investigators have not given up hope of finding Gina's remains.

"We would like her mother to have closure, the ability to put her daughter to rest," said one of the investigators who has remained close to Gina's mother.

"There's a psychological comfort that comes from knowing where your children are, even if it's not in a cemetery.

Right now, Gina's mother's relationship with her child is on hold. Finding the body doesn't ease the pain, but it can close the book on a chapter, and Gina's family members can move on."

Meanwhile, several law enforcement agencies - including some in Utah and Arizona - have taken an interest in Williams' past as a result of information gathered during the Gina Dawn Brooks investigation.

July 27, 2001 -- It has been 12 years since Gina Dawn Brooks of Fredericktown disappeared and yet the search continues to this day for her body. The spotlight has been put on this case once again after a tip was given to the FBI and a search on a piece of property began near Fredericktown for her body.

No new evidence was believed to be found. Fredericktown Chief of Police Keith Despain said they follow every lead seriously.