Goodspeed's History of Southwest Missouri, published 1888, page 615: Modern Townships: In May, 1839, the boundaries of Vineyard Township were so altered as to commence where Centre Creek crosses the line dividing Newton from the old county of Barry, thence east with Centre Creek to Watt's Mill, thence on the due east line to the section line, running north and south, that will be east of the place where Beecher formerly lived, thence north so as to include Stall's Creek to the divide between Turnback and Spring Rivers, thence northwest with said divide to the line dividing Jasper and Dade Counties, and thence south with the county line to the beginning. Jacob Fisher's house was designed the meeting place.

Research Note: Turnback Creek is northeast of Billings in Lawrence County. It heads from a large spring. There is a pond there where it starts then it runs north till it hits spring river. One researcher said that he had always heard that was why it was called turnback , on account of it running north instead of south. But the Long family tells that Turnback Creek was named by the Long family. It is the location where the Hiram Long family came into the area. It was where one of his sons, thought to be the one named John, turned back and went back to Ripley Co., MO.

B. B. Clement's Mill

Goodspeed's History of Southwest Missouri, published 1888, page 617: Mountain Township was established in June 1846. The boundaries extended from B. B. Clement's Mill, at the head of Roaring River,Thence a little east of north until the line reaches the divide between Rock House Creek and Flat Creek, thence to J. Speak's house, thence direct to include David Short's house, thence north including Jenkins Creek, thence east to Taney County, south to Flat Creek Township, and with the line to Clement's Mill. Elections were to be held at George Wilson's house, with Joseph Doty, A. Baze, and James Stotts, Judges.

Goodspeed's History of Southwest Missouri, published 1888, page 703: Ash's Old Mill was one and one-half from Seligman, at the big spring. Fawver's Mill was one mile southwest on Sugar Creek, and was afterward converted into a rolling mill.

Goodspeed's History of Southwest Missouri, published 1888, page 700: Corsicana is a flourishing little town. There are two dry goods stores, two blacksmith shops, one drug store, one fine flouring mill, one cotton gin, one carding machine with three sets of cards, one printing press (W. I. I. Morrow, editor), one post-office, Odd Fellows Hall, a school-house, a band of music, and the largest tax payer in the county. 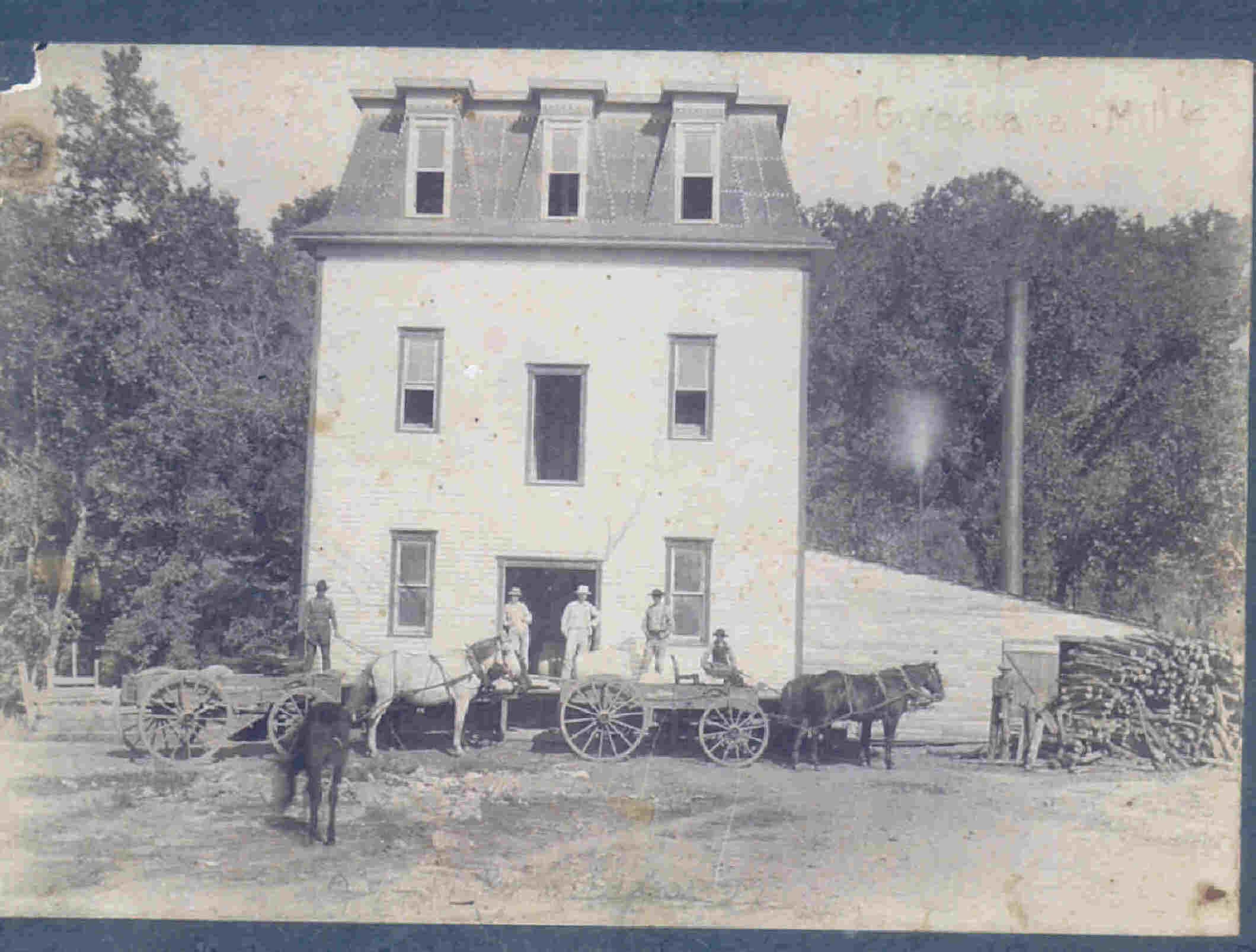 Jim's Garrison family, including the Blankenship family, were early pioneers in the Corsicana area. His great grandfather John Rite Garrison farmed on Pogue's Creek and many of his ancestors were educated at Swindel College, west of Corsicana.

At one time, this mill was owned by his great uncle, Charter Garrison.

Goodspeed reports that in June of 1870 Blankenship added saw mill machining to his flouring mill on Indian Creek.

In 1882, Rev. L. J. Blankenship's flouring and woolen mills was listed as a Corsicana business in Goodspeed's History, pub. 1888.

McDowell Mill, a mile south and east of McDowell, on Flat Creek. 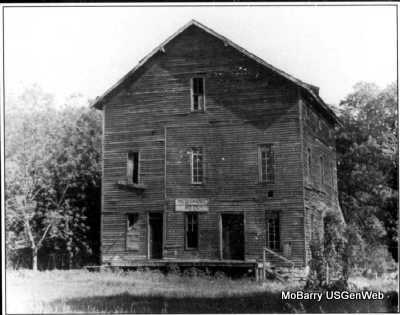 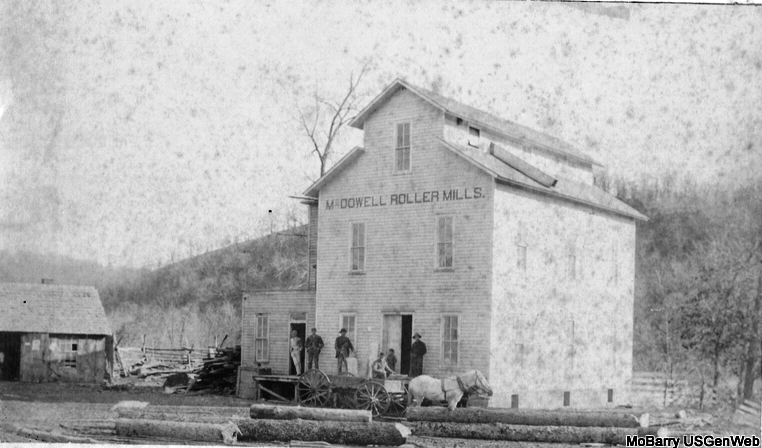 Ref: Historical Spots in Old Barry County, by Nellie Alice Mills, printed 1952, page 44 & 45: "Through Lucile Morris Upton's Waste Basket I have found a gold mine of information in A. E. Jester. After reading an article of his there I immediately wrote to him. I put together a consecutive story what I have learned about him."

"First, he writes: "We landed in a chartered box car at Exeter in November, 1881. I went over in the Talbert Mill on Flat Creek. I thought it was the most wonderful thing I had ever seen. Charlie Talbert was my first playmate in Missouri. His father owned the mill. We had great times together fishing and boat riding on the mill pond."

"At that time there were five water mills on Big Flat Creek and one on Little Flat. The Talbert Mill was about five miles below Cassville. There was a little corn mill just below Cassville. It was a little thing. The dam was made of logs, rocks, and dirt. The Blankenship Mill was below where Jenkins now is; it was not there then."

"I have seen people come for miles to get their grinding done. They would have to stay over night, camping near the mill. I worked in those mills. We always took one eight of a bushel of corn for toll and gave 33 pounds of flour and 10 pounds of bran for one bushel of wheat. I know all about those mills."

"Mr. Talbert bought his mill from the Hutchens Brothers who went to McDowell and built the mill that is now standing there just as it was when they built it."

"Mr. Jester is sure the mill at McDowell was not destroyed by the Marshfield Cyclone. The Hutchens Brothers brought the old mill, which was built over the creek. In the story of McDowell, the Goodspeed History states that the Hutchens Brothers, "reestablished their flour mill," while in the Biographical Appendix it reads 'The Hutchens Brothers, determined to be up to date, tore down their old mill and built a new mill in which they put a full roller process in order to keep abreast of the the times.' "

"I will agree again quoted Mr. Jester: "That old mill was standing at least a mile south of McDowell. It stood over where the turbine wheels are now located. The Hutchens Brothers built their new mill back from where the old mill stood. It was run with a cable.The saw mill they had in connection with the flour mill was an old mill when it came to Missouri."

McDowell Mill, from the photo files of Darla Marbut 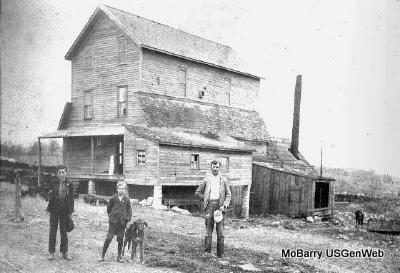 From the research and photo files of Darla Marbut

Henry McCary, one of Barry County's pioneers, recalled in an address prepared for an 1876 Centennial celebration in Cassville, that when he arrived here in the fall of 1836 there was a small tub mill on the head of Roaring River.

A "tub" mill was particularly suited to the situation at the Roaring River spring because such a mill did not depend on a dam to furnish power. It could be operated by a swiftly moving stream of water coming into the "tub" area by means of a flume. The power came from a crude turbine arrangement with a small rotor about three and one half feet in diameter. It was located in a shallow "tub" into which the water poured from a flume or a natural fall. There was no gearing in the mill since the turbine turned the lower millstone directly by means of a "shaft" which ran through the upper stone without touching it. What you see here in this picture is probably the shaft.

By 1845 the grist and flour mill was built at Roaring River. The mills were destroyed during the Civil War (1861-1865) but were rebuilt afterward.

From Goodspeed's History of Southwest Missouri, published 1888: "Henry McCary, writing in Centennial year, speaks of the early settlements as follows: "I came to the county thirty-nine years ago last fall, and found but scattered and thinly-settled neighboring communities in different parts of the county. At that time there was but one post-office in the county, called Mount Pleasant,The then county seat of Barry County, between 20 or 30 miles northwest of where it is now situated. A small tub mill on the head of Roaring River, near where the Trim and McClure mill now is, and another on Flat Creek, 12 miles north of where Cassville now is situated; another at the falls of Shoal Creek, and a small mill, kept by William Pogue, on Pogue's Creek, near where Mrs. Swidle now lives."

Milo and Nicey Haddock Russell used these mills because they lived only a little ways from them. In Sidney Russell's Civil War letter he talks about how he enjoyed "mill" day.

Darla Marbut said that the naturalist, Merle Rogers reported that he had been under water and stood on the parts that she took pictures of and he also told her there was also a rock wall down there too.

Darla also mentioned that from her research that she learn that in these old mills there was no heat because they didn't want sparks flying around the mill work.


BELOW - MILL POND AT ROARING RIVER

From the photo files of Gary Ball 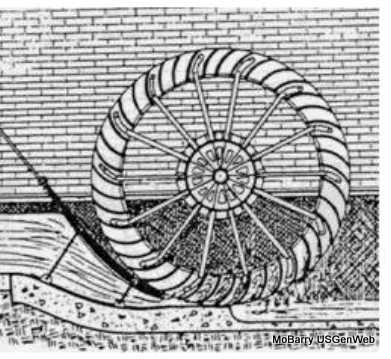 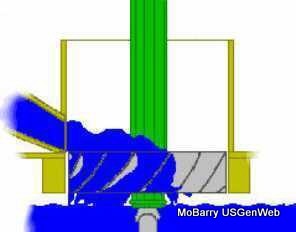 Please help us preserve our history

by adding a story or photo.