When working with census data in Madison Parish, especially the older censuses, it is important to realize that in the past various parts of the parish have been included in other parish censuses.  For example, from 1810 to 1830 the northern portion of the parish was part of Ouachita Parish while the southern portion was located in Concordia Parish.

Madison Parish was created in 1838 and reduced to its current boundaries in 1861. Prior to that time it had been a part of the New Orleans District (1721), Ouachita "County" (1805), Concordia "County" (1809), Warren Parish (1811), Ouachita and Concordia Parishes (1814) and Carroll Parish (1832). However, even though a portion of Madison was included in Carroll Parish when Carroll was formed in 1832, it was never included in a Carroll census. By the next census in 1840, Madison had been created and was a separate and distinct unit.

The maps below should help locate the present day Madison Parish, shown in dark blue, as it appeared in past years. At times Madison occupied an even larger area than today. These areas are shown in a lighter blue.

The 1810 and 1820 census data are actual images of the Concordia Parish census taker's form. The 1830 data is an alphabetized listing of transcribed Concordia data. The 1810, 1820, 1830, 1840, 1850, 1860 and 1870 census indices are alphabetized listings of the Madison (Concordia and Ouachita) census "index" that show names of heads of household and the page numbers where the actual images may be found on microfilm. As additional data is located, it will be included. 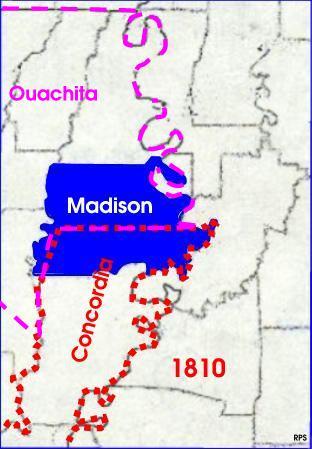 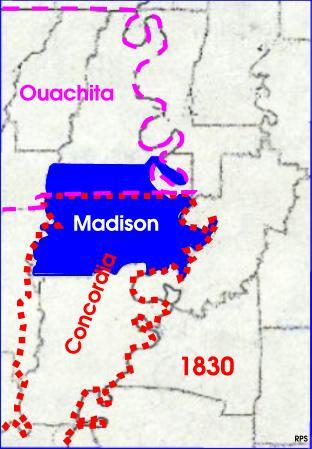 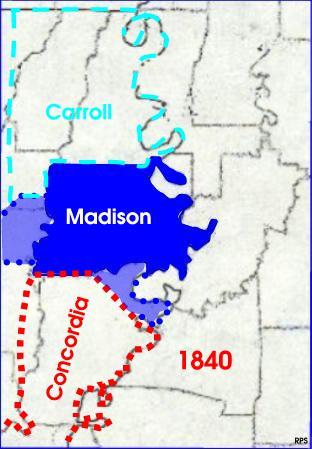 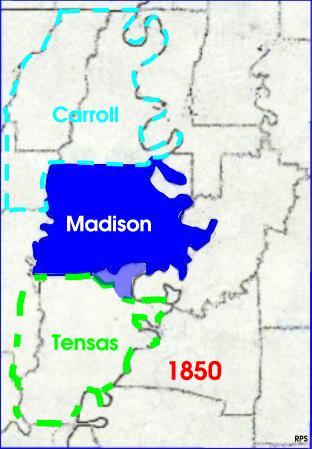