Much of the data, and all of the diagrams in this article came from David F. Bastian's fine book "Grant's Canal - The Union's Attempt to Bypass Vicksburg" and appear here with his permission. Many thanks, Dave! This informative book may be purchased from the Vicksburg National Military Park, most chain bookstores and Amazon.com. It provides a valuable piece of Madison Parish and Vicksburg Civil War history and should be in the library of everyone interested in this area.

Madison Parish has never received proper recognition for its participation in the Civil War, especially in the Union Army's preparation for and Siege & Battle of Vicksburg. In addition to totally ignoring the many skirmishes fought in Madison, most historians omit or gloss over the Battle of Milliken's Bend - a fierce hand-to-hand combat on June 7, 1863 where over 1,000 men became casualties in a very short period of time. Some prominent historians have placed Milliken's Bend in Mississippi, and one even put it in Arkansas. Fewer historians mention the Battle of Richmond on June 15, 1863 where the most important town in the parish and Parish Seat was burned to the ground - never to rise again.

Most historians do give some mention to the abortive attempts of Generals Williams and Grant to bypass Vicksburg by changing the Mississippi River's course through diversion canals. However, even though the canals were within Madison Parish, Madison is seldom mentioned as the canals are usually referred to only as "on the other side of the river". 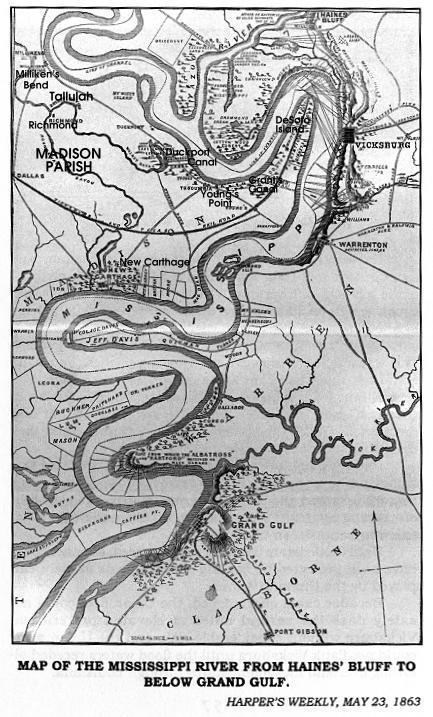 Note that the railroad is shown considerably south of its actual location.

In 1862 Vicksburg was a thorn in the Union Army's side. The upper and most of the lower Mississippi River was already in Union hands. In order to control the lower Mississippi River as a supply route some means had to be devised for boats to get by the heavy artillery pieces at Vicksburg. Because of a sharp hairpin turn in the river at DeSoto Island across from Vicksburg, the Yankee boats were at the mercy of the guns perched atop the high bluffs, especially those north of the town on Fort Hill.

Before the Battle of Vicksburg, two attempts were made in Madison Parish to divert the river away from the town by attempting to cut canals. An additional canal was attempted at Duckport to be used as a bypass route for supplying Grant's troops south of Vicksburg.

The Commanding General at the time, Brigadier General Thomas Williams, attempted the first canal in 1862. To dig the canal, Williams initially commandeered as many as 1,200 slaves from the surrounding plantations. This number later expanded to 3,200 soldiers and slaves. 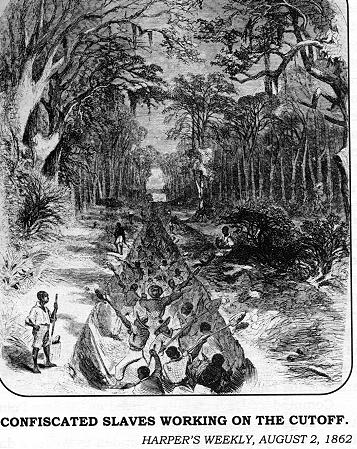 The canal had to be dug under miserable conditions. In addition to occasional fire from the Confederates, the humidity and temperature were unbearable, and the mosquitoes inflicted excruciating pain and disease on the slaves and soldiers alike. Rations were inadequate and clean drinking water unavailable. Sickness finally reduced the force of 3,200 to 700. To make matters worse, the River continued to fall faster than the canal could be dug. The Williams' Canal, later to be reopened as Grant's Canal, was a failure.

In October 1862 General Ulysses S. Grant was placed in charge and in December Union troops moved into the area at Milliken's Bend and later Young's Point. 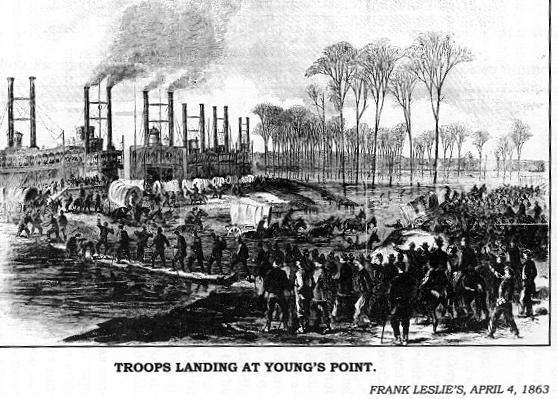 In January 1863 Grant began an attempt to reopen and enlarge the canal started by Williams, because no attempt had been made by the Confederates to fill it in. Since water from the river had already entered about 75 yards into the upper canal, and water stood in pools throughout the canal's length, an attempt was made to broaden it in hope that natural erosion would deepen it. This did not happen, and by February the canal was finally dammed with closures at each end so it could be drained and more easily deepened. 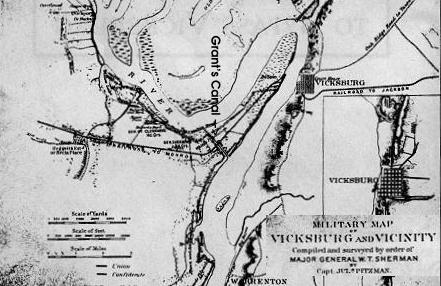 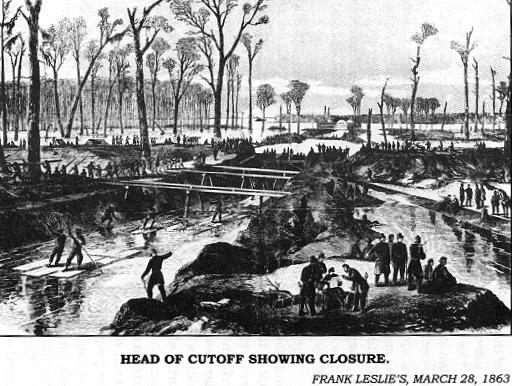 At this point the river began to rise faster than the workers could handle it, and soldiers & slaves worked around the clock to keep the project from failing. Of the 35,000 troops stationed in the area, only about 3,000 worked on the canal. As before, miserable conditions and sickness - especially diarrhea - claimed their toll. Of the total troops in the area about 85 died each day from disease and were usually buried in levees - the only high ground available. 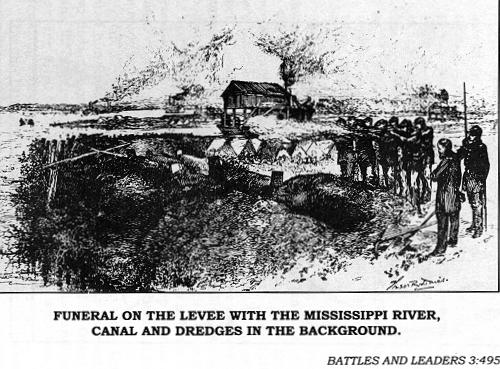 Torrential Spring rains and inoperative pumps caused the area including the campsites to flood, preventing the soldiers from working on the canal for all but two hours a day. On March 1, much-needed dredges arrived to help with the cleanout and digging tasks. 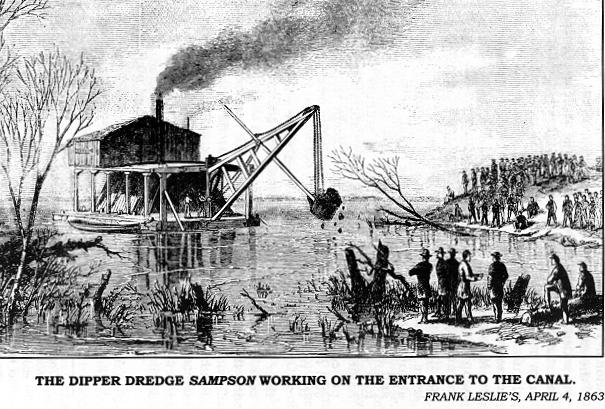 Unfortunately for the Union, the upper dam gave way on March 5, and the area again flooded to the point that several of the campsites had to be evacuated to Milliken's Bend. After the crevasse was plugged with confiscated timbers ripped from buildings on local plantations, dredges resumed their cleanout work, and stumps were blasted out with black powder. By March 19 accurate shelling from Confederate batteries forced the barges to work only at night. The dredges were withdrawn on March 24, and Grant's Canal was pronounced a failure. 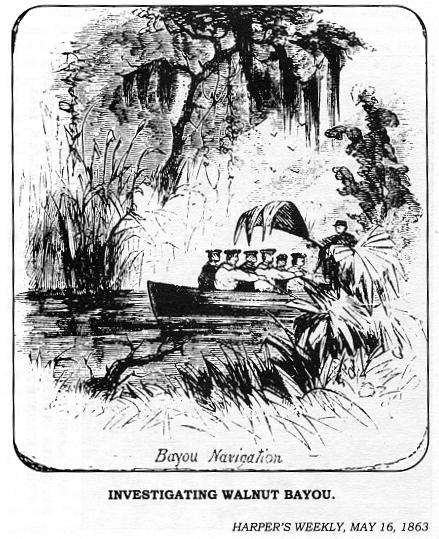 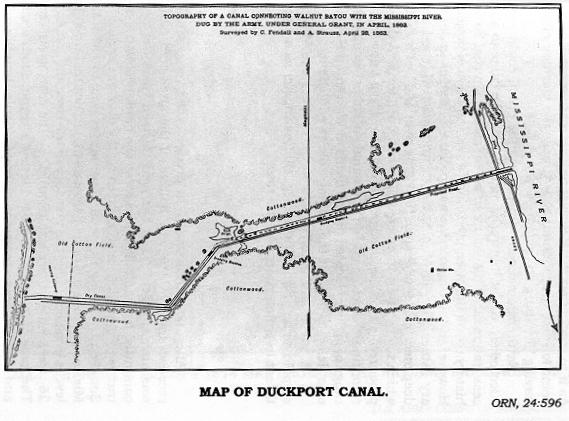 The Duckport Canal was underway by April 10 with 3,500 workers. This canal was not intended to divert the Mississippi River, but rather to be used as a bypass supply route since Grant had already ordered his troops to march south from their headquarters at Milliken's Bend through the swamps to New Carthage. These troops were later to cross the River and proceed via Port Gibson, Jackson and Clinton to Vicksburg. By April 22 at least four dredges were working on the canal.

By the end of April it was apparent that the Duckport Canal was not to be. Again, the river fell rapidly to the point that the dredges could not keep up with it. With the water depth in the canal reduced to less than a foot in some places, the boats that were running the route at the time were trapped and grounded between Duckport and New Carthage. They were abandoned and left to decay in the mud. As were the other canal projects, this project was also discarded.

Ironically, nature later accomplished what the Yankee troops could not when on April 26, 1876 the Mississippi flooded across DeSoto Island and cut a new channel two miles from downtown Vicksburg.

What is left of Grant's Canal is now part of the Vicksburg National Military Park.