Mount Hope Cemetery, located to the North and East of Neosho Rapids, Kansas, is described as being the south half of the SE quarter of the SE quarter of Section 21, Township 19, of Range 13 East of the 6th Principal Meridian. The deed was signed by Jacob JACOB , Jr., E.R. SEELEY , and O.F. RICHMOND , on the 21st day of July, 1875. Forest R. PAGE was the Notary.

Proprietors of the town of Neosho Rapids were Robert S. STEVENS , Forest R. PAGE , and George J. TALLMAN . Hiram SLEEPER , the Notary with witnesses to deed being Joseph M. WHITE and J.C. DAVIS . Laura FRENCH writes on page 134 of "The History of Lyon County", says H.S. SLEEPER helped lay out the town of Neosho Rapids, not mentioning the name of R.S. STEVENS whose name does appear on the recorded plat.

There were three previous attempts to the laying out of towns in the vicinity and the names given them were Florence, Neosho City, Italia and lastly Neosho Rapids. The David VAN GUNDY family came to the neighborhood in 1855. Jefferson PIGMAN who is buried here, was one of the two founders of the first town of Florence in 1856.

The plot is a beautiful one, well cared for, and lies on a hill sloping in all directions. To the North runs the Santa Fe Railroad. To the South and West is the Neosho Valley and town. To the East is the Catholic Cemetery. 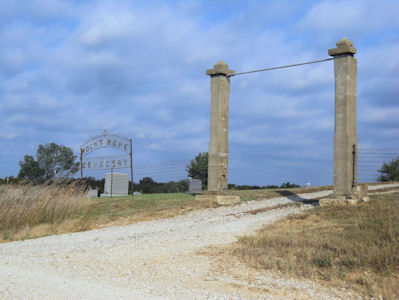