The town of Agnes City was located on the Old Santa Fe Trail, several miles east of Council Grove, Kansas in Breckenridge (now called Lyon) County, Kansas. It became a post office in 1857 with A. I. BAKER as postmaster. A store there did business with those who trekked over the trail and settlers on the claims nearby. H. F. MCMILLAN, who came from Clarke County, Illinois in 1867, later became the postmaster. Daniel CROYLE, a farmer and stock raiser from New Cambria, County, Pennsylvania was Justice of the Peace. John WINGFIELD, a farmer and stock raiser, came from Clinton County, Ohio in 1872, and served as constable of Agnes City. WINGFIELD is buried in the Agnes City Cemetery.

The town is now defunct, and the only thing that remains is a "Santa Fe Trail" marker placed there in 1906 by the Kansas Daughters of the American Revolution, and the State of Kansas. There is another D.A.R. marker near the site of the old Charles WITHINGTON Toll Bridge, over 142 Mile Creek, to show where the early Post Offices along the trail stood. Charles WITHINGTON was the first settler in part of the county in 1854.

The cemetery is still kept up. 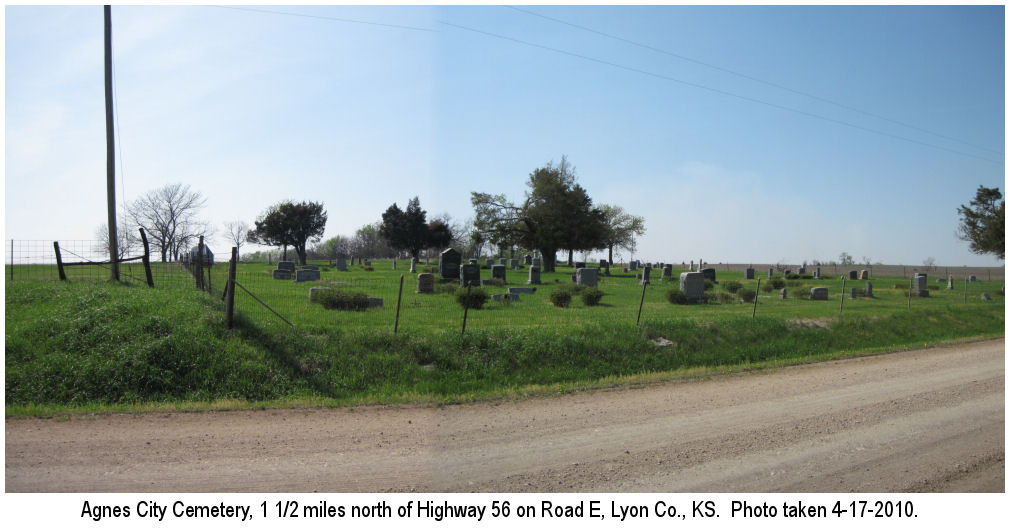 Agnes City Cemetery Tombstone Readings and more
This link contains extras information as well as pictures of some stones.
{Used with permission from the researcher who posted the site.}