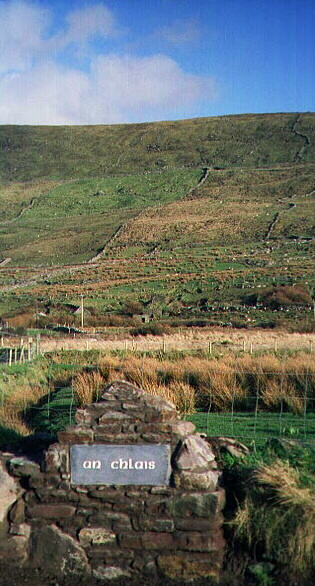 Here it is, the photo you've all been waiting for... 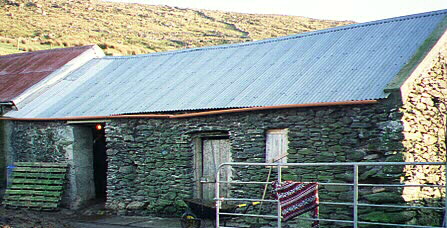 THE "COW HOUSE " IN CLASH!
Picture this stone building standing alone, with a thatched roof.
This building used to be a house built by Hugh O'Connor appx 1810,
now used as a "cow house" on Michael O'Connor's property in Clash. 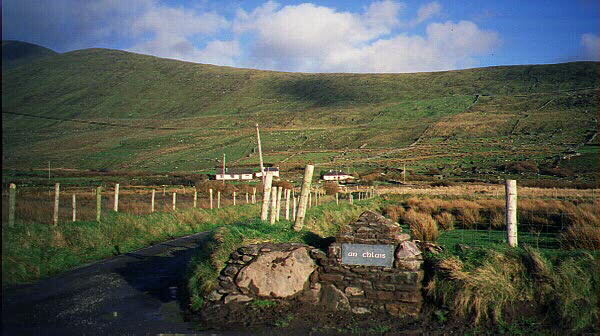 More of a long distance view of Clash and Brandon Mountain foothills behind,
with the O'Connor property across from the white house.
I often think that my grandfather George d 1984, would loved to have known that I have located our great great grandfather Maurice's birthplace in Ireland and had been in touch with our Irish relatives. Who knows, maybe he does know!

Their son Maurice, born February 11, 1821 in Clash, married Catherine Martin of nearby Garrane, Kilmalkedar Civil Parish on Shrove Tuesday, February 22, 1846. Hugh O'Connor was born to them on October 22, 1846. They were separated by ;"Adversities of Fortune" when they emigrated sometime in 1847. Maurice worked laying track on the RR thru Brattleboro, Vt. When the work stopped in Brattleboro in 1849, Maurice by that time reunited with Catherine, stayed and settled there.