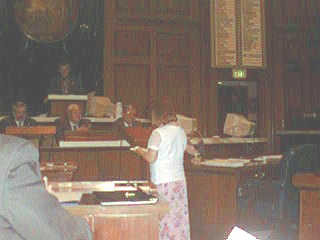 Ashley Loweth is a third-grader from Jeffersonville, Indiana who went with her father, Donnie Loweth, to Indianapolis on February 8th, 1999 to testify in the House Chambers before the House Committee on Agriculture, Natural Resources and Rural Development concerning the woeful inadequacies of Indiana's cemetery protection laws.

Though only 8 years old, little Ashley proved to be the highlight of our day!

About 16 supporters of the INPCRP arrived at the Capitol at about 1:30 P.M.  Several hours later, we went into the House Chambers.

I must admit that, other than the endless standing on those hard marble floors, I really enjoyed the fellowship with so many people who share my concerns and interests. 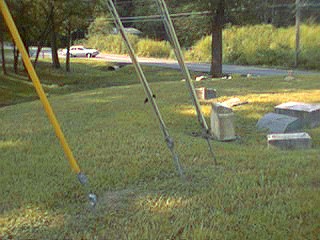 Donnie Loweth's family cemetery in Clark County, Indiana was blacktopped in the 1970s and turned into a parking lot -- graves notwithstanding.  Last Fall, Donnie, his wife Carol, their son A.J. and their daughter Ashley spent weeks cleaning up the little corner of the cemetery that was not paved over.

With her teacher's permission, her father took Ashley out of school for the day and we brought her with us to the Capitol.

When the hearing began, Rep. Markt Lytle thanked us several times for our fortitude and explained that, because of the lateness of the hour, rather than receiving comments on individual pending bills, the Committee would hear brief testimony from anyone wishing to speak about the situation in
general.

I got up and did my little song and dance.  Then Rep. Lytle called Ashley.

Though she was conspicuous as the only child present, I think all of them were a bit stunned when she got up to speak.  Ashley approached the microphone and, in a very clear, calm voice, said:

"Good evening!  It makes me very happy and proud to speak before you today, but it also saddens me for the reason that I am here.

"My name is Ashley Loweth.  I'm 8 years old and I'm in the third grade.

"The reason I am here today is, we write laws every day to protect ourselves and our rights.  That is great.  But what about after we leave this world?

"I am a descendant of the Nathan Hale you may have read about in your history books.  I have three generations of great-grandparents buried in a little lonely cemetery in Clarksville, Indiana.  What is sad about this is that three-fourths of the cemetery is now under blacktop and the law says, 'This is okay.  As long as the property owner is paying taxes, they can do what they want.'

"How would you feel if your Grandma took you to put flowers on your great-grandparents' grave and you were told, 'There they lay, under that blacktop!'

"Well, I know that feeling and it hurts!  Not only blacktop, but there are two pay phones and a utility pole with guide wires going into a grave. That's not all.  They even have an EPA monitoring device in the middle to monitor the ground for their gas pumps."

"I am asking you to please change this law for some day I will want to take my children to this very same lonely little cemetery and be able to say, 'This is where we came from.  This is our roots!

Ashley received a standing ovation.  I don't believe there was a dry eye in the house.  She left the Representatives speakless.  Rep. Lytle jokingly asked, "Does anyone on the committee have any tough questions for Ashley?"  Of course, there was nothing they could say.  She'd said it all.

The rest of us then had our opportunity to speak and I'm very proud of each and every one of you who toughed it out with us.  I don't believe, however, that there's much question that little Ashley stole the show and the rest of us were just there to lend our support to her plea.