Bring one or two items that you would like to have Roger look at and place on the table in the front of the room. You can bring more but please keep them under your seat until we see if we have extra time as we have a “limited” time. If things move along quickly then we have the opportunity to have extra things appraised. This is a mega fun experience! He will give you an approximate appraisal, if he is able. No guns or firearms please. Also, please bring a food item to share for our refreshments. Drinks will be provided.

Margaret Hobson will be in attendance. If you get your book at the meeting, you will avoid shipping charges. She will have her latest book for sale and she will be giving members the opportunity to purchase at the discounted price of $30.00. This book is even larger than the others, at 570 pages. We are supporting Margaret, any way we can!

Mr. Berndt was born and raised in DeKalb County, and has for many years been researching the electric interurban line and six steam railroads that once had a presence here. He currently resides and works in Ft. Wayne and is a member of the Three Rivers Railroad Heritage Council, a local railroad history group.

Share a story or superstition that was in your family or in your life personally. There are many superstitions that your ancestors might believe in. I always heard the common ones. Walking under a ladder is bad luck. My stepmother always said bread and butter if an obstacle was in front of you and you went on one side and they went on the other side. Tapping on wood three times, Knock three times on wood after if you were talking about something good happening, otherwise it was bad luck. Bad luck will follow the spilling of salt unless a pinch is thrown over the left shoulder. If a black cat walks towards you, it brings good fortune, but if it walks away, it is taking your good luck with it.

Jill Devine will talk briefly about the origins of Halloween.

Above picture was taken at a recent Halloween party. Pictured: Jon and Amanda (Wells) Blackman.

The tour will be by bus and will cover the towns of Butler, Waterloo, Corunna, Garrett, and Auburn.

From Butler travelers will be taken to Waterloo to hear stories of a “ghostly grandma” and a “haunted woods,” along with a bazaar story of Indian Burial grounds and what excavators discovered at the turn of the century.

Going through Corunna and onto Garrett, travelers will hear stories of not one, but two “haunted graveyards,” along with a “haunted house” where police were called on the resident “ghost!”

Garrett will be the next town featured where bodies were unearthed building homes and causing hauntings, and an old abandoned hospital wasn’t really abandoned after all, and a disturbing outbreak in the 1980’s causes havoc to this day.

Auburn will be the final stop with another “haunted cemetery”, a museum where cars aren’t the only thing you will see, and a no longer operating hotel where guests still apparently check in but don’t check out.

Tickets are $10 a person. All the proceeds from the tour go to the DeKalb Genealogy Society to clean and repair cemeteries in DeKalb County. Hope you can come! CALL JILL AT 260-385-0498 (cell).

NOTE: This tour is created and told by Jill Devine and is sponsored by the DeKalb County Indiana Genealogy Society. Limited seating on our charter bus. Please call Roselyn Wells if you want advance tickets. (Which is the only way you are assured of seating. ) Not recommended for the under 13 crowd. If they come, these stories may bother them. NO SMOKING OR DRINKING.

Meet at the back of the Garrett Calvary Cemetery. Please bring mosquito spray and a chair if you would like to sit at the beginning.

Join us, as friends and members of the DeKalb County Indiana Genealogy Society portray various residents or relatives of residents of the cemetery.

Hear about the United States commissioning an airship or blimp from England to be delivered to the United States. While being tested in England, it blew up with 44 people dying. Lloyd Crowl was one of the American serviceman that were killed.

Hear this and other heart rendering stories of Garrett Citizens. Some names that are included are: Crowl, Father Young, Kobiela, Placencia, Swartz, Schudel.

If it thunderstorms or rains heavily, please call Roselyn Wells for further information at 925-0384. You do not have to be a member to attend and there is no charge for this fun historical walk! 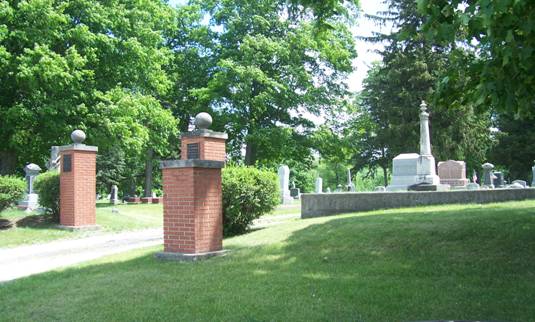 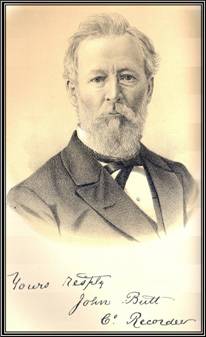 A fun cemetery walk is planned for Waterloo Cemetery on Monday, June 9 at 6:00 p.m.

Residents will be portrayed by various Genealogy Society members or friends. Some of the names covered will be Hanes, Butt, Clark, Link, Rickel, Bartholomew, Shoemaker among others.

Find out about a murder that happened in Garrett where the victim apologized to his shooter.

Did you know at one time, there was an aviation field just north of Waterloo and the sad story of the person that started it?

Bring mosquito spray or umbrella if there is a misty rain. If there is a thunderstorm or heavy rainstorm, we will be meeting at the old depot by the Railroad tracks. Bring a chair to use at the cemetery, if you would like.

Next month, we plan on doing another cemetery walk at Calvary Cemetery in Garrett.

They will be talking about repairing stones and showing before and after pictures. A few stories about the fixed stones will be thrown in.
They will be giving this talk on May 19 at Williams Co. Genealogical Society

"Sweet Auburn The loveliest village of the plain." This line from an Oliver Goldsmith poem is believed to have inspired the naming of Auburn, Indiana. Known as "The Home of the Classics" in honor of the Auburn, Cord, and Duesenberg automobiles built by citizens of the city from the early 1900s through 1937, this classic theme runs deep within the people who shaped the very fabric of the community. Locals such as John Martin Smith, Irene Bisel, Dr. Bonnell Souder, Charles Eckhart, Glenn Rieke, William McIntosh and others devoted themselves to nurturing Auburn’s vibrant heritage. This book, Legendary Locals, that Chad Gramling created, explores the stories of these men and women. Chad will give a short talk on his book! Don’t miss it!

Come and join us for a research night. We can teach you what and how to look for information in the library or you can start right away on your own. We will have a couple of helpers to give you guidance. The general public does not have access to the library on Monday nights (unless they come with a member or have heard about this night)….

A librarian plans on telling us about the digital lab before we get started – are you maybe looking for a local photo of a building or prominent person? This may help you now or in the future after they are done with their project.

DAR, What Is It and How Do You Join?

Daughters of the American Revolution (DAR) is a thriving women’s service organization which focuses on work in local communities to promote historic preservation, education and patriotism. Judy Richter and Margaret Ott will present a program about what is DAR and how to join.

If you have your lineage figured out, bring it. If you know of a relative that has joined the DAR in the past, bring their name. (Example, Mother, Aunt, Grandmother) Any information to get started is helpful, such as your Revolutionary War Ancestor, if you know it. This program will help you join or give you tips on finding out the information that you need.

Bring your laptop, if you own one, we can access patriot information in the meeting room by WIFI.

Watch the weather. If the weather is bad, that day, please call Roz Wells, President at 925-0384 before you venture out. I will probably be gone at 5:00, to set up the room, if we do have the program. If we have bad weather, we will be postponing the meeting until May 12.

A life-long interest in the American Civil War and a trip to Antietam, MD for the 130th anniversary of that battle is how Julie began her Civil War re-enacting and living history life. The years 2011 through 2015 mark the 150th anniversary of the American Civil War. They also mark the same anniversary for our national military cemeteries. Julie’s presentation on “America’s National Cemeteries: A Walk in the Stone Gardens,” came out of visits to Antietam, Gettysburg, and Springfield, Mo National Cemeteries.

Hundreds of photos of and 44 cemeteries later, Julie put together a photographic journey of her visits and impressions that scan the country from Culpepper, Virginia to San Francisco, CA. This presentation will focus on when and how the cemeteries came to be, the words and music associated with them, and personal stories of those who here gave their last full measure of devotion.

Julie has been a speaker at local and national groups including, The Society of Civil War Surgeons, The MidWest Civilian Re-enactor Conference, The Lincoln Museum, genealogy groups, museums, schools, and civil war round tables. Julie shares her love of the civil war and the final resting places with her husband, David and son, Michael, both re-enactors. Sadly, her two step-daughters, Margot and Carmen, only go to balls! See pics below of Julie. Aren’t they wonderful?

Return to the Main Page