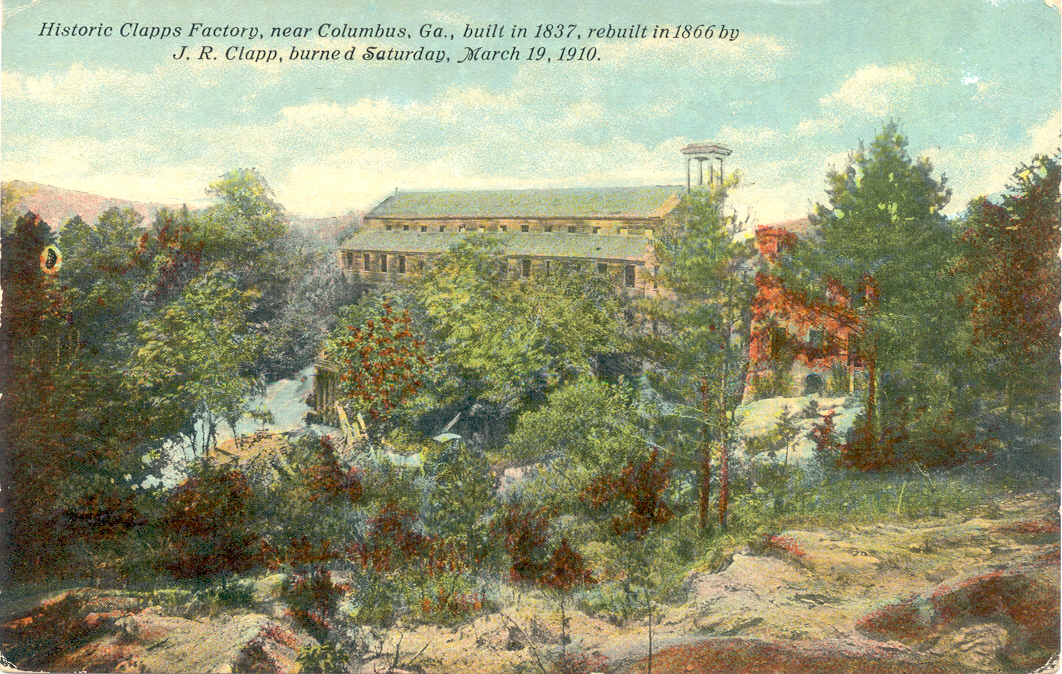 No writing or postmark appears on the back. Published by S. H. Kress & Co.; Made in U.S.A. There's no indication of the date the postcard was made, but domestic postage was one cent and foreign, two.

I did not notice the buggy (or car? - I can't tell which) in the black and white version in WORSLEY. It must be driving right along the bank by the water. I still can't tell if that's water flowing out of a tunnel under the red building, or if it is rock. If it is water, then it would seem that the main building is built out over the river, or on an island (as Rosebird said she'd heard), with water flowing on the west side of the main building to turn a wheel, and perhaps also through the red building to turn another wheel, possibly to run the corn and wheat gristmill?

This is a scan of the illustration of Clapp's Factory on p. 376 of "Columbus on the Chattahoochee," by Etta Blanchard Worsley (Columbus Office Supply Company: Columbus, Georgia, 1951). There are no photo credits listed, but by all appearances it is the face of a postcard.

The caption under photo reads: "Old Clapp's Factory was situated 2 1/2 miles above Columbus near the present Columbus waterworks plant. The Chattahoochee dashing over the rocks was beautiful at this point." 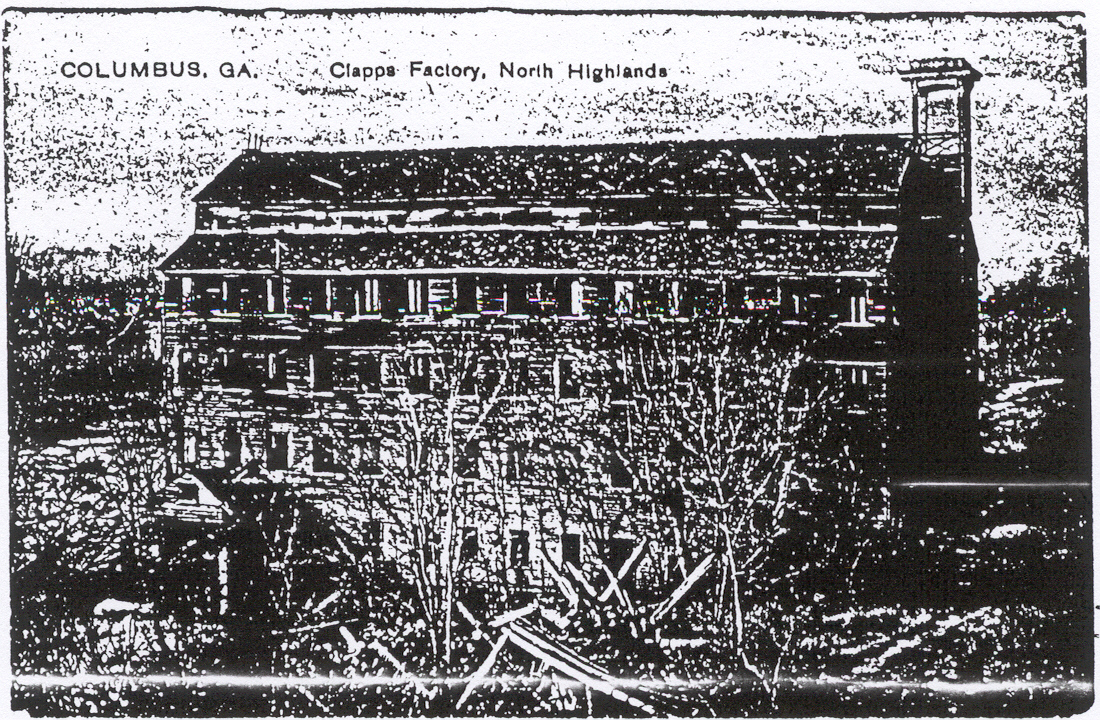 Postcard from the Heritage Columbus Foundation. The back of the postcard has no writing or postmark on it. It is stock # 7386 with W. A. WHITE & Co. of Columbus, Ga. and was made in Germany (no date appears, but the postage rate at the time was 1 cent in the U.S. and Canada, 2 cents for abroad). 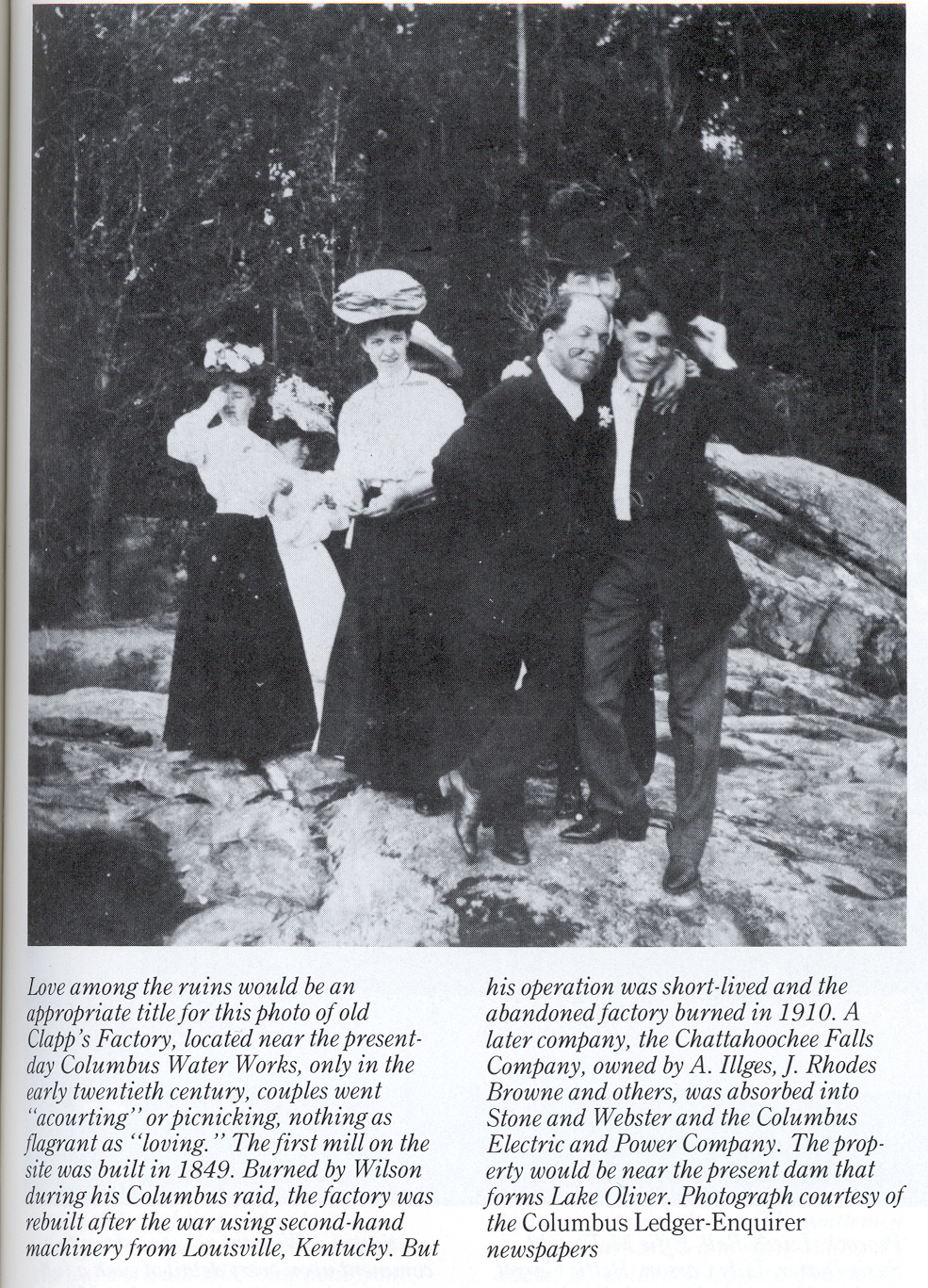 Love among the ruins would be an appropriate title for this photo of old Clapp's Factory, located near the present-day Columbus Water Works, only in the early twentieth century, couples went "acourting" or picnicking, nothing as flagrant as "loving." The first mill on the site was built in 1849. Burned by Wilson during his Columbus raid, the factory was rebuilt after the war using second-hand machinery from Louisville, Ky. But his operation was short-lived and the abandoned factory burned in 1910. A later company, the Chattahoochee Falls Company, owned by A. Illges, J. Rhodes Browne and others, was absorbed into Stone and Webster and the Columbus Electric and Power Company. The property would be near the present dam that forms Lake Oliver. Photograph courtesy of the Columbus Ledger-Enquirer newspapers.

Whatever the official name of the firm, the name of the picnic site was always "Clapp's Factory." And for decades beginning with the Gay Nineties and ending with World War I, "Clapp's Factory" was the city's favorite picnic site. In 1834, Martin's history refers to the Columbus Mercant Mill being completed three miles north of Columbus and run by James Shivers and Company. In 1849, came the Columbus factory, with its incorporators (and brothers, by birth or marriage) Charles D. Stewart, John Fontaine, Henry D. Meigs, J. R. Clapp, and George Stewart. This mill, three or four miles north of Columbus, was burned on General Wilson's command. In 1866, the factory was rebuilt and officially incorporated as the Columbus Manufacturing Company. In 1880, this mill had 4,296 spindles and 134 looms. Its officers were J. Rhodes Browne, president; A. Illges, secretary; and R. B. Gunby, treasurer. This three-storied ghost factory burned on March 19, 1910, and its property was purchased by the Stone and Webster Company. Photograph courtesy of the Columbus Ledger-Enquirer newspapers.

Also of interest, regarding Stone and Webster, is the following from p. 104:

The city's first central station hydro electric plant came into being in 1894 when the Columbus Railroad Company leased the structure projecting out into the Chattahoochee and limited water power use from the City Mills. Installed were four sixty-eight-inch vertical Samson Leffel turbines, with several more added a couple of years later. Until 1902, this station supplied all of the city's commercially-transmitted electricity. After the North Highland Dam was constructed in 1902 and all the power companies merged under the Stone and Webster Company in 1906, the Columbus Railway Station became a very minor producer of current. Some generating equipment is still operative on the property. Photograph courtesy of the Columbus Ledger-Enquirer newspapers.

The wilderness area along the banks of the Chattahoochee north of town where generations of Columbusites had festive picnics and the traditional site of the together-in-death-rather-than- separated-in-life plunge by the Coweta maiden and her Cusseta brave lover (or was it a Cusseta maiden and her Coweta brave lover?) was changed radically when a large textile plant with twenty thousand spindles was built by Bibb Manufacturing Company. And this romantic spot vanished completely when the North Highlands Dam, the largest in the south at the time, was finished in 1902. Photograph courtesy of the Columbus Ledger-Enquirer newspapers.

All materials contained on these pages are furnished for the free use of those engaged researching their family origins. Any commercial use, or, other electronic posting of any files/pages without the consent of the host/author of these pages is prohibited. All images used on these pages were obtained from sources permitting free distribution, or generated by the author, and are subject to the same restrictions /permissions. All persons contributing material for posting on these pages does so in recognition of their free, non-commercial distribution, and further, is responsible to assure that no copyright is violated by their submission.