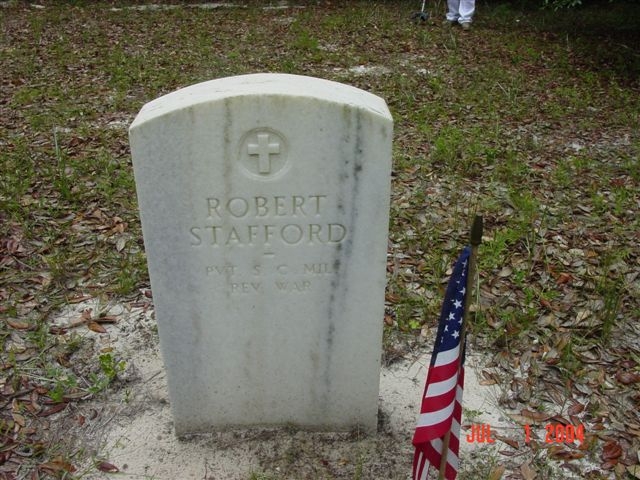 Robert Stafford (1765 - 1829) was a Revolutionary War soldier. He was born in North Carolina to Joshua Stafford and Martha Stafford. His grandfather, William Stafford had emigrated to Virginia in 1622. During the American Revolution, both Joshua and his son Robert served in the South Carolina militia; Joshua served for 176 days, and Robert as a Private, and a Lieutenant for 181 days. Around 1791, Robert Stafford married Jane Blair, daughter of William Blair of northern Ireland and his wife, Sibbiah Earl Blair. Records indicate that Robert and Jane relocated from Effingham County, Georgia to Glynn/Wayne County around 1810. In a letter dated June 23, 1939, Margaret Cate said, "He lived and died on the old Post Road at Tuckerville, the first county seat of Wayne County." Robert Stafford signed his last will and testament, duly witnessed by Peter McIntyre, John Fort, Jr., and John Ammons. Robert Stafford is buried at Whitaker Hill-Harrison Cemetery at the intersection of the old Post Road (N) and U.S. Highway 32.