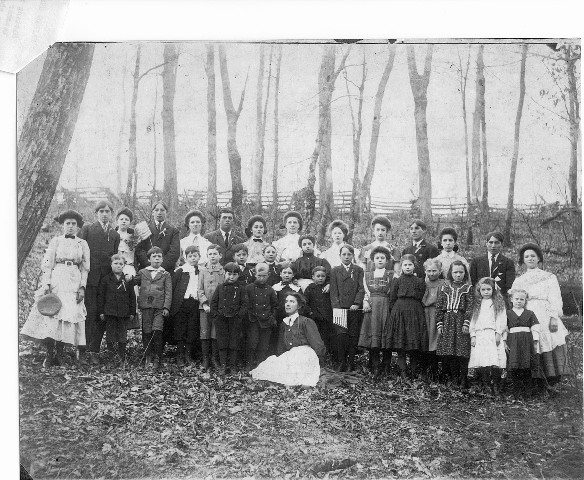 Payne's Creek School 1908-1909: My grandparents are standing in the back row: Minnie Peters is 5th from the left, and Frazier Kelley is next to her, 6th from the left.

Thanks to Cecil Hill for providing the names of people in 1908-1909 Payne’s Creek School picture:

Back Row (left to right): Wilma Kelley, Jack Vest, Beulah Radford, Glen Vest, Minnie Peters, Frazier Kelley, Wilma Young, Sallie Turner, Miriam Howell, Gaye Akers, Odell Thompson, Lee Ingram, Wilson Kelley, and Lelia Peters. There are about six friends who were not members of the school who were visiting the day the picture was made. 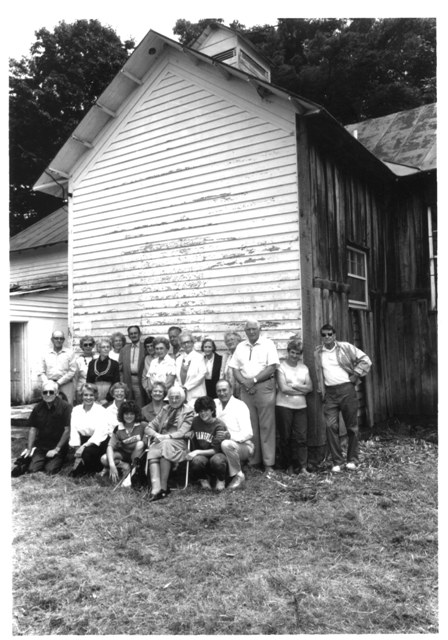 Kelley School Descendants: This picture was taken in the summer of 1989 on “Picture-Taking Day.” The event was organized by researchers from Va Tech who were working on a study of the school for the National Park Service.

And I wish I knew who the rest of the people are! 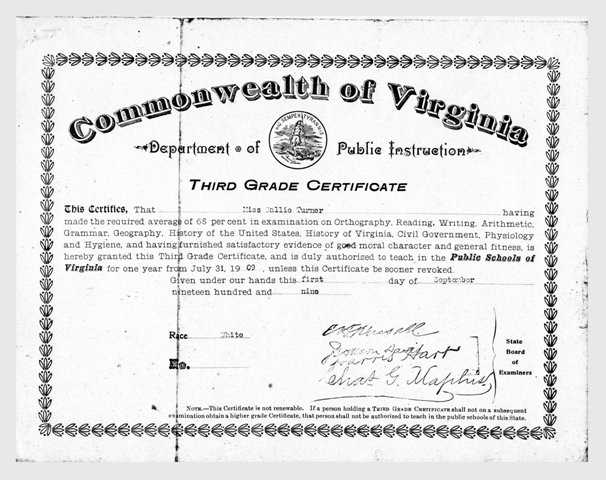 This Certifies, That Miss Sallie Turner having made the required average of 65 per cent in examination on Orthography, Reading, Writing, Arithmetic, Grammar, Geography, History of the United States, History of Virginia, Civil Government, Physiology and Hygiene, and having furnished satisfactory evidence of good moral character and general fitness, is hereby granted this Third Grade Certificate, and is duly authorized to teach in the Public Schools of Virginia for one year from July 31, 1909, unless this Certificate be sooner revoked.

Given under our hands this first day of September nineteen hundred and nine, [signed by four members of the State Board of Examiners]

Note: This Certificate is not renewable. If a person holding a THIRD GRADE CERTIFICATE shall not on a subsequent examination obtain a higher grade Certificate, that person shall not be authorized to teach in the public schools of this State. 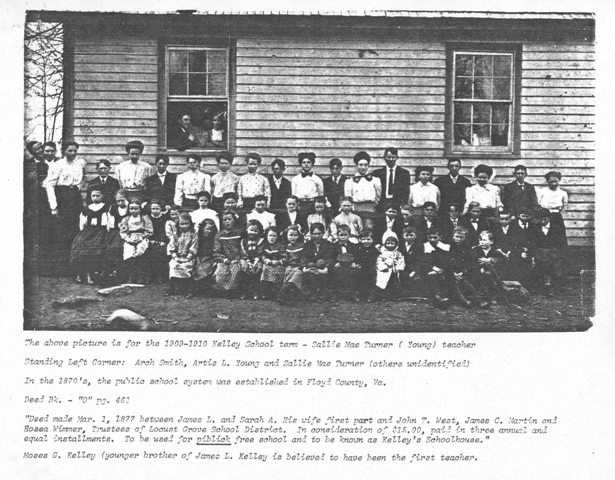 The above picture is for the 1909-1910 Kelley School term - Sallie Mae Turner Young, teacher.

(Notice the people looking out of the school windows.) 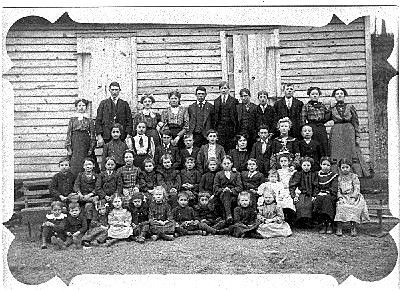 1905 Floyd Co VA School: Kelley? School: Who are these people? I was told this is a picture of the Kelley School; however, the picture was estimated to have been taken approx. 1905 or 1906. The Kelley School House was built in 1924. What school is this? Anybody know? Photo Credit:Paula Kelley Ward ChaChaLady(at)sbcglobal.net

"The Kelley School was originally built as a two-room schoolhouse in 1924. It is located on the Blue Ridge Parkway at milepost 149 in Floyd County, Virginia, where the Parkway intersects with Route 678. Over the years, it has undergone numerous transformations from a schoolhouse to a private dwelling to a public store. Fortunately, throughout its years of transformation, many of the early school features were preserved." Source of quote: Friends of the Blue Ridge Parkway Burks Fork School abt 1913Please help identify these students. Stella Pratt, is 5th from the right on the front row.

Credit to Ole Paul for allowing me to add the following School photos from his site at Ole Paul's Place. Also thank all of you for shareing your photos. Unidentified Group

Located: Somewhere in the vicinity of Kenny Phillips's house. Before you get to the church.

From Irene Underwood to Ole Paul

From Irene Underwood to Ole Paul

Hylton School dated 1929 has Momma's husband Herman Guthrie in it. I believe him to to be on the back row, last boy on right. Rest of ID on back of pix lists in this order but no description of order -- Kane Dickerson teacher; Guy, Wayne, Ollie Mae and Ester Fay Gardner; Elva; Dot King; Ruth Sutphin. Must be Christmas time as the kids in front appear to have ground pine wreaths. (Contributed by Linda Stanley) [11/04]

Hylton School has Mr. Dickerson again and the same two young ones in white standing out in front - also same girl third row back with hair almost sticking in her mouth. I believe my momma to be on the back row (5th) the third person from left. Here is ID from back of photo, again no order indicated: Harry Alderman, Leatha Poff, Vera, Wayne (Gardner), Ollie Mae Gardner, Rolley (?) Alley, Harry (?) Weeks, Ester Gardner, Ruth Sutphin, Curtis Weeks, Hassel Alley, Roscoe Poff. (Contributed by Linda Stanley) [11/04]

Reidsville School has my momma looking like a boy, back row, second from left (Contributed by Linda Stanley) [11/04]

Indian Valley School 1910 Can anyone identify the people in this photo and tell us where it is located? Photo provided by Mary F Johnson