Near the Osage/Lyon County line

Early Stotler Cemetery and School
On this site the Stotler Community educated its young and buried its dead.

The Burlingame Trail and the Lawrence-Emporia Trail crossed the area. The earliest settlers followed the trails and near where they crossed Salt Creek, built their cabins. These earliest settlers were Frances and John Cabbage. Then a short time later in 1869 Claus Peterson and A. P. Walstrom, young Swedes, bought 100 acres adjoining the Cabbage claim.

In 1873 the families of Mangus Lungren and John Sutherland arrived from Galesburg, Illinois, and constructed caves or huts near the claims of Peterson, Walstrom and Cabbage. That year Bohn Blex and his family arrived. Earlier in 1869 a Swedish committee had been sent out from Princeton, Illinois, to investigate a settlement area and so in 1874 a group of Swedish families joined the growing Stotler Community. This group was led by Swan Fager who was born on January 1, 1835 in Smoland, Sweden. He had changed his name from Swan Peterson as that was a frequent name among early settlers. Families began arriving in larger numbers-- Gust Rudeen, Swan Lindholm, Andrew Chelberg, and C. I. Johnson. Last names of Fagerstrom, Melgren, Swanson, Gustafson, Hoglund, Josephson, Lundholm, Anderson, Olson, Hagberg, Eklund, Johnson, Pholson, Sanders, Ericson, Ogren, Holmberg, Bergmann, Eastberry, Lundstadt, Christianson and Lagergren appeared among the residents. Then in 1874 an early school--District No. 70--was built on this site. Only eight students attended school the first year. They were Pete Fager, Charles Fager, Fritz Johnson, Charles Lungren, Emma Walstrom, Tillie Peterson, Frank Rudeen and John Rudeen. However, in the 1880�s and 1890�s enrollment grew so a new school was built in 1884-85 and the highest enrollment reached 75 students in 1892-93. Three students sat in each desk. Although each school term was for six months most students did not attend regularly because of the need to help at home. It was not unusual to have pupils ages 20-21. A cistern and well were dug for water and native trees were planted. The land for the school and cemetery was donated by Swan Fager and initially the cemetery was known as Fager Cemetery.

The Stotler School, located on this side, was the social center of the Swedish community. In the 1880�s and 1890�s, there were singing schools, night schools, and literary meetings which included ciphering, spelling bees and debates. In 1878 the Stotler Mutual Aid Association was formed by early settlers in the Stotler Community. Each member contributed to a fund which could be distributed to someone who received wind or fire damage to their farmstead. The Stotler Mutual Aid Association is still in operation to this day.

The Stotler Lutheran Church was started in 1907 by some members of the Stotler Mission Covenant Church who broke away over the issue of atonement. A white clapboard sanctuary was constructed in the southwest corner of South Carlson Road and Road 350 intersection. The church was disbanded in 1941 with most members either joining the Stotler Mission Covenant Church across the road or the Grace Lutheran Church in Osage City which had been started in 1874. Rev. Cyrus Wedin was the last official pastor and Oscar Fager the last lay leader.

A cemetery was developed on the hill west of the school building. The first burial based upon records was in 1867. It is estimated that 80-90 people are buried here, however actual records reveal that 44 individuals are interred here. A list of the known 44 people buried here in the 1800�s and early 1900�s is as follows: 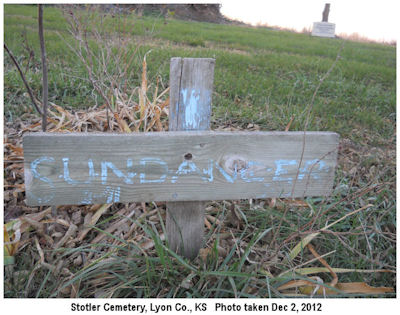 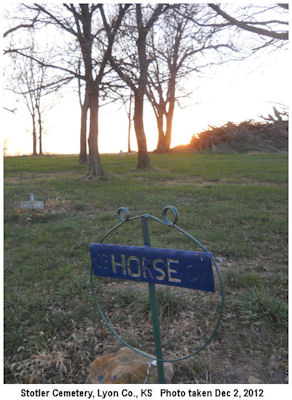