Oliver PHILLIPS, who was the second settler in Breckenridge County, (now Lyon County), made settlement on Duck Creek early in the year 1855, a few miles south of the Santa Fe Trail. The only wagon trail at that date in this part of Kansas Territory.

Mr. PHILLIPS was a surveyor by trade. He surveyed Emporia in 1857, laying out, as he traveled to the proposed town site, a road which later became a Government State Route to the southwest.

The kindly and generous hospitality of Oliver and his wife, Calista, grew into the making of their home into a State Route Tavern. The house they built in 1856 was a stone structure. In 1874 this house would not hold the many over-night guests traveling through so a wing was added. Today, the PHILLIPS home stands in good repair and maybe found four miles west and four miles north of Reading, Kansas. (Note: good repair at the time this was written in the 1950's)

Marion PHILLIPS, five year old son of Oliver and Calista PHILLIPS, died Nov. 27, 1856, he was buried near the home. Settlement of this fertile creek land increased, deaths in families began to be numerous causing a demand for a burial place. Mr. PHILLIPS seeing the need, gave for public cemetery use a plot of land on a pretty knoll to the south of the creek, a short distance from his home, and moved his son's body to this cemetery.

The Cemetery Plot given by Oliver and Calista PHILLIPS and described to contain 84 square rods of land was filed for record by F.R. PAGE, Register of Deeds in Lyon County, on May 5, 1877. On the 4th day of Dec. 1928, Mattie PHILLIPS, widow of Frank PHILLIPS, (youngest son of Oliver and Calista), deeded to the Reading Township a similar sized plot, one half acre, for the same usage. Compensation to be the removal of an old Osage Orange hedge fence and perpetual care to be given the Cemetery, by the Reading Township. These two plots as one, consisted of one acre of land, are located in Section 23, Township 17, Range 12, southwest of the Road U and Road 270 intersection, 3 miles north and 4 miles west or Reading, Kansas.

Phillips Cemetery has been in constant use since its beginning, and is under the maintenance of the Reading Township Board. 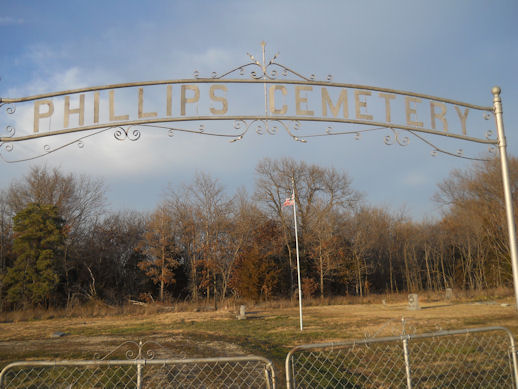