From the mid-1800s to approximately 1915, the "Colored People's Burial Grounds" (as it was known on the deed records) in Floyd Co. Indiana was the primary burial place for Floyd Co.'s Black population.

New Albany was a major stop on the Underground Railroad.  To survive the crossing of the Ohio at New Albany meant that an escaped slave had reached freedom.  However, many of these slaves who reached Indiana's beckoning shore did not survive their ordeal and many of them are reported to be buried here at the "Old Colored People's Cemetery."

This was also the primary burial place for New Albany's Black population throughout the latter half of the 19th Century.

The site, in excess of 4 acres in size, is literally covered with ancient graves.  A conservative extimate is that there are 300 people buried here.  Because of the enormous size of the cemetery and the density of field stone markers, some believe the actual number is a good deal higher. 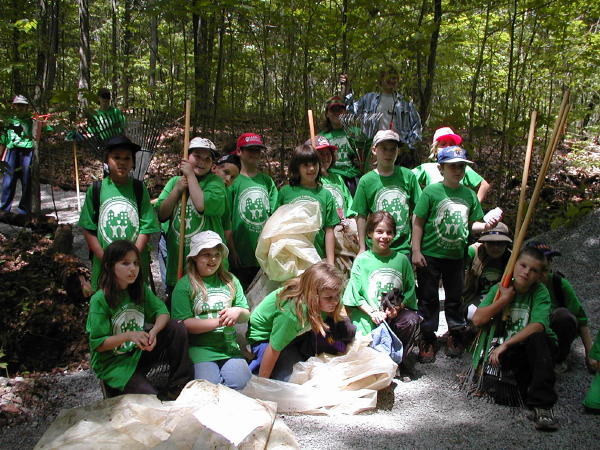 The 3rd and 4th grade classes at S. Ellen Jones Elementary School have adopted this cemetery as their community service project.  They have invested a tremendous amount of effort researching the history of the site and as well as coordinating community-wide efforts to clean up the long-neglected site.

The goals accomplished by the children have have impressed so many members of this community.  Just a few of the learning activities through service in which they have been involved are:

The 80 students of the 3rd and 4th grades from S. Ellen Jones Elementary School are working in conjunction with the efforts of Tom Cannon (the New Albany Township Trustee), the legal owners of the property (the New Albany Civic Club), Al Nelson (a local stonecarver), community service workers provided through the Floyd Superior Court and members of the Southern Indiana Genealogical Society (SIGS), the Clark County Cemetery Preservation Committee and the Indiana Pioneer Cemeteries Restoration Project, as well as many other individuals with an interest in preserving this site.

The children's first actual workday at the cemetery was Wednesday, May 10, 2000.  The 80 students were joined by New Albany Mayor Regina Overton, Bob Lane (Director of Parks and Recreation), Don Harshey, Pam Peters (local historian and author) and a host of others.

These remarkable students and their teachers (Ms. Julia Samples, Ms.Deanna Campbell, Ms. Mickey Hicks, Ms. Anita Seybold and Ms. Amy Harper) on Saturday, May 13, 2000, combined their efforts 20 or so other people, working tirelessly for hours raking, cleaning and setting out paths through the site. 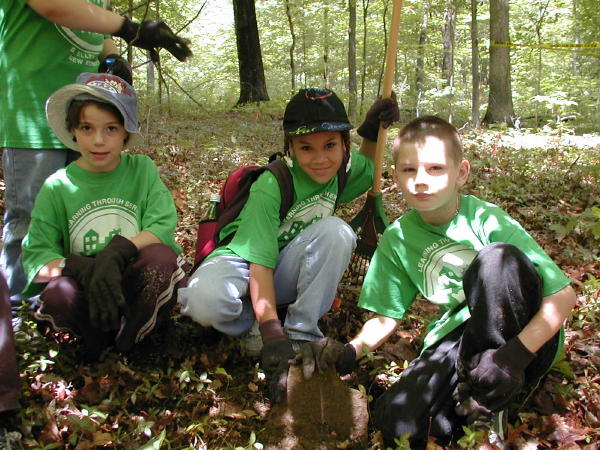 During the May 13th Community Day, quite a few previously undetected buried fieldstone markers were discovered, including the one pictured here.

The vast and overwhelming majority of the hundreds of graves found here are marked only by fieldstone markers.  A few are marked with "conventional" markers, but all of them are broken.

With the permission of the New Albany Civic Cllub, the students have chosen to rename this site "Freedomland Cemetery", to honor "the history of our community and realizing there lies a land of freedom for all."

During our time at Freedomland Cemetery on May 13th, Jack Briles and I had the pleasure of uncovering a beautiful buried stone, covered by at least 4 inches of composted leaves and forest debris.  This stone probably snapped off its base as a result of the tilting of its base, caused by the heaving of the earth during the cold winter months.  The base rests nearly horizontal to the ground.  The stone was found face down beneath the soil.  It is in spectacular condition and will be very easy to repair.


Picture #1 above is the stone before excavation began; notice the base and the stub of the stone in the lower righthand corner.  The second picture is the stone after it was excavated and flipped over as it fell and was buried face down; notice the impression of the stone in the black dirt.  The third picture is the stone of Maria CHRISTOPHER, still wet from being washed and gently cleaned.  Click on any of the pictures above for a larger image.  Maria's stone (which features a rose that has fallen from its stem), bears the following inscription:

"Dearest sister thou hast left us.  Here thy loss we deeply feel.  But tis God that hath bereft us.  He can all our sorrows heal."

We'll keep you posted as the students from S. Ellen Jones Elementary School progress in their plans to make the care of this cemetery a perennial project for their successor students.