John and Blanche Nelson and "The Stuga" 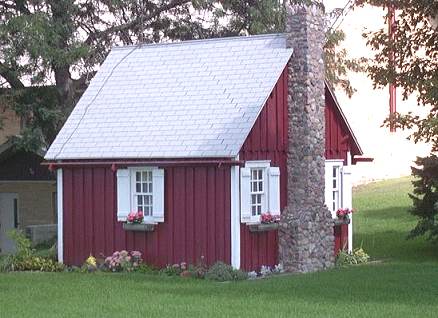 The Stuga. Photo by Charles Hanson 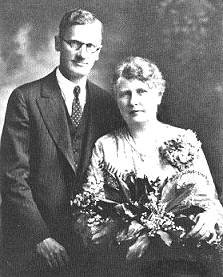 Blanche Benson was born in Batavia, Illinois January 28, 1874.  She was confirmed at Bethel Lutheran Church near Kiron on May 20, 1888.  In 1891 the family located in Odebolt when she joined Odebolt Lutheran Church.  Blanche was active in Sunday School and Luther League.  She was an accomplished artist and many of her paintings hang in the Faith Lutheran Church today.

John Nelson was born in Wheeler Township, south of Odebolt, February 22, 1879 and graduated from Odebolt High School in 1897.  John was a charter baptized member of the Odebolt Lutheran Church (Faith Lutheran) serving as Sunday School Superintendent and President of Luther League.

John and Blanche were married June 14, 1905.  They were engaged in mercantile business at Herring, Iowa for 8 years until in 1913 when they moved into a new farm home, “The Maples”, in Wheeler Township.  During his life, John became an extensive farm landowner.  Both John and Blanche enjoyed traveling to Sweden and spent many winters in California.  They celebrated their Golden Wedding Anniversary in June of 1955.  Blanche died in December of 1955.   John died in April of 1964.  John’s estate bequeathed the net income of his farm to Faith Lutheran for the life of the church. 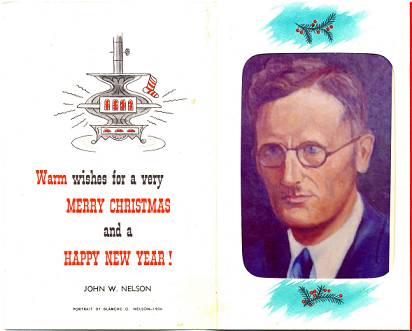 A Christmas card sent to Sweden.  Blanche painted the portrait of John.
(Courtesy of Anders Samuelsson, a relative in Sweden)

Funeral services were held at 2 p.m. Friday afternoon, Dec. 16 for Mrs. John W. Nelson, who died at the Ida Grove hospital Wednesday, Dec 14, 1955.
The Rev. Palmer Sellstrom was in charge of the services. Anna O. Anderson was vocalist, and Mrs. Frances Sandberg organist.
Interment was in the Odebolt cemetery with Martin Carlson, Martin Salmonson, Axel Carlson, B. E. Leonard, Hilding Pearson and George Noyd as attendants.
The following obituary was read at the services. Blanche Olivia Nelson, daughter of Lars and Britta Benson, was born in Batavia, Il. Jan. 28, 1874. She died Wednesday morning in Ida Grove, Ia.
She was baptized Feb. 16, 1874 in the Lutheran church at Batavia, Ill. In 1879 the family moved to Denver, Colo. She with her parents came to Ida County, Iowa in 1882. She was confirmed May 20, 1888, at Bethel church near Kiron, Iowa by the Rev. Liljegren. In 1891 the family located in Odebolt, Iowa. Blanche transferred her membership from Bethel to the Odebolt Lutheran church.
She was united in marriage to John W. Nelson on June 14, 1905. They were engaged in mercantile business at Herring, Iowa for eight years. In 1913 they moved to their present home south of Odebolt.
She was of a cheerful disposition and a good sense of humor. She was active with the work of the Sunday school and Luther League for many years.
Mr. and Mrs. Nelson were fond of traveling and spent many winters in California. Mrs. Nelson was an artist; her talents will always be remembered in the Odebolt Lutheran church.
Mr. and Mrs. Nelson had the privilege of celebrating their Golden Wedding Anniversary June 14, 1955.
Her parent and a brother, John O. Benson; sister, Mrs. August Lunblad and a foster brother, Andrew Spear preceded her in death.
She is survived by her husband, two nieces and a nephew, besides a host of friends.
Those attending from a distance were: Mr. and Mrs. Clayton Rude, Mrs. J. L. Hartigan, and Daniel Hartigan all of Ute, Mrs. John Gerken and son, Mike of Sac City, Mr. and Mrs. George Petersen and Mrs. and Mrs. J. L. Benson of Willmar, Minn., and many from Arthur, Lake View, Wall Lake, Boyer, Kiron and Ida Grove.

John W. Nelson, 85, died at the Lutheran hospital in Sioux City Friday, April 10. He had a coronary attack while spending the winter in Los Angeles, Cal. from which he never recovered. He was hospitalized in Los Angeles for 10 weeks. He was brought to the Sioux City hospital for two weeks and was later transferred to Twilight Acres at Wall Lake. He became ill Tuesday, April 8 and was returned to the hospital in Sioux City where death came Friday.
Funeral services were held Tuesday afternoon, April 14 at 2 o'clock at Faith Lutheran church in Odebolt. The Rev. Palmer Sellstrom officiated. Burial was in the Odebolt cemetery with Albert Huldeen, George Lundgren, James Scott. John Brower, B. E. Leonard and Arthur Schmidt the attendants.
John W. Nelson, son of A. P. and Maria Nelson [their biography] was born in Wheeler township, Sac County, Ia., February 22, 1879. After graduating from Odebolt high school in 1897 he attended a business college in Des Moines. He entered into partnership with O. J. Benson, Nelson General Store. It was located where the First National Bank building now stands. Later the business was moved into the building now occupied by Jim's TV and Appliance. In 1904 the business was traded for a farm near Ute which Mr. Nelson still owned at the time of his death. Mr. Nelson started a general store in Herring, Iowa, the same year and he operated the store until 1914. He was an extensive farm land owner.
He was married to Blanche A. Benson of Odebolt June 14, 1905. The farm home, The Maples, south of Odebolt was built in 1912 and they made their home there until her death in December 1955. Mr. and Mrs. Nelson observed their Golden Wedding anniversary earlier the same year.
Mr. Nelson was a charter baptized member of the Odebolt Lutheran church and was active in the life and work of the church. He was Sunday school superintendent and president of the Lutheran League for many years. He enjoyed traveling and with his wife made several trips to Sweden and other European countries. They spent many winters in California and the south. Mr. Nelson continued his traveling after the death of his wife.
He was preceded in death by his wife and eight brothers and sisters.
Survivors include a nephew, J. L. Benson of Willmar, Minn., and two nieces, Mrs. George Peterson of Willmar, Minn., and Mrs. E. Jahode of Rochester, Minn.
Relatives attending the services were Mr. and Mrs. J. L. Benson and Mr. and Mrs. George Petersen of Willmar, Minn., Clarence Andre of Urbana, Ill., and Elmer Turnell of Chicago. Friends attending were from Ute, Breda, Wall Lake, Lake View, Sac City, Ida Grove, Kiron, and Denison.

The “Stuga” and “The Maples”

A typical Swedish home of the older days, a “stuga”, (meaning little house) could be seen at their home. John Nelson's father and mother constructed this home as they might have built in Sweden in the southeast part of Minnesota in 1872.  In 1874 they came to Sac County, never returning to their former home.  John and Blanche decided they would travel to where his parents formerly lived.  To their surprise an old lady was able to point out the very house his father had built in 1872.  It had not been used as a home for some time and the man who owned it was planning to tear it down.

The Nelsons purchased the old home and moved it to their home at Odebolt.  It was taken down piece by piece and shipped to their home.  When it arrived it was carefully reconstructed just as it was with the boards running up and down rather than in a horizontal position as we are used to seeing them.  The exterior is a scheme popular all over Sweden.  The Nelsons placed all of the old family relics, many of Swedish origin, in this little house.  Blanche painted many Swedish proverbs and sayings on the beams of the interior.  Many have visited and spent a lot of time examining the collection.

After the Nelsons passed on, much vandalism was done to the many keepsakes.  The “Stuga” was moved onto the Faith Lutheran property by Toy National Bank of Sioux City and was restored during the Spring and Summer of 1985.  Dedication Services were held August 4, 1985.

Sac County Conservation Board has made the “Maples”, (John Nelson Corner), a historical park, with a monument of a large rock and plaque erected in memory of John Nelson, and with a shelter house for public use.

(transcribed by B. Horak)

We invite you to visit the HISTORY INDEX for more on-line Odebolt History!