(Butler Herald, Tuesday, Sept 26, 1911) [Reprint Sept 2005 Taylor Tracer]
At a very important meeting of the county board of Education held in the office of commissioner, A.S. Wallace, last Tuesday, one of the most interesting matters disposed of was contracting with teachers for the various schools of the county.
Below we are pleased to give a list of the rural schools of the county and by whom to be taught for the ensuing five months beginning not later than the fourth Monday in October, but may begin as early as the second Monday of the same month.
The schools and names of teachers are as follows:

By 1956 all the smaller "country" elementary school like Crossroads, Central, Mauk, Wesley, Turner's Chapel, Crowell, Taylor Mill, Rupert -- had been consolidated into either Butler or Reynolds High School.

Visit this page for some amusing anecdotes of school life.

Butler Herald- Sept. 16, 1915
The board of trustees of Harmony school which is composed of Messrs. S. E.Cox, W. H. Theus and C. D. McInvale met on Sept. 2nd and unanimously elected Miss Lila Davis, of Ideal, teacher of that school. The term will begin the last of October.

My Dad, W.T. Hamilton started to Howard school abt. 1910. His first teacher was a Miss Sealy. After she married and left, Miss Mattie Julia Van Landingham became his teacher, until he moved away in 1917. Miss Mattie Julia married Hugh Perkins.
William F. Hamilton wham@oconee.com

(Butler Herald, Thursday, April 4, 1918) Wesley School closed here Friday after a successful term taught by Misses Mattie J. Vanlandingham and Wynelle Pope. A good program was arranged for the occasion, each child doing his part well. The exercises were well attended and enjoyed by all the people of this community as well as from elsewhere. Each of the girls carried something they had made such as cooking, needlework, etc. It was a pleasure to see what progress our school has made within the past year. County School Superintendent Wallace was present and gave a good talk which was very much enjoyed. Those completing the seventh grade and receiving state certificates: Misses JESSE HEATH, INA ROYAL, GLADYS HAYWOOD, MAUD AMOS and MR. WALTER SUGGS.

Miss Bessie McGuffin, Miss Bessie Childs and Mrs. Ruth Williams Martin were the teachers with Miss Ida Childs serving as the principal. Some years earlier J.A. Heath deeded land to the community for a school located between the Wesley Church and the Terrell Robbins home. The first school building had been across from the church. In later years W. Herman Elliston became principal and the school was consolidated with the Central School in 1943 after which the building was torn down and no evidence of the old school is there today. H.A. Sealey served as one of the trustees for many years.

One of the early schools was Professor George Dwight School. Its first floor held the classrooms and the upper floor was a dormitory for boys from nearby towns. Average number of pupils was 60.

In the early 1900's Georgia legislature passed the "McMichael Bill" which allowed local school districts to have elections for school taxes to maintain their schools. Reynolds elected J.H. WHATLEY, C.B. MARSHALL, and R.A. HINTON as the first Board of Trustees.

That same year(1904) Henry Theodore Coleman left a portion of his estate to the Reynolds School and when the new school was dedicated in 1905, it was named for this donor.

This was a two story wooden building. There were four classroom (each holding two grades) on the main floor with an auditorium upstairs. Outdoor privies were used for years. The drinking fountain, located in the back yard, was a single pipe with the faucet turned upside down. There was a bell in the belfry and there is a stroy of a near disaster when the bell once fell.

The first Superintendent was Mr. Roth (a short term) followed by Mr. J.W. BLOODWORTH. Mr. E.H. JOINER was Principal and served for over 40 years.

In a 1909 catalog, Coleman Institute boasted of being "one of the best equipped secondary school in Georiga". With a population of only 1,200 (Reynolds) plans were being made to construct a 50 room dormitory for out-of-town students! The first graduating class (1909): Agnes SEAY, Elam GRIFFITH, Marie BARROW, Wales INGRAM, Clara MUSSELWHITE (all five went to college). Total enrollment for the 1909-1910 was 163 pupils.

Coleman Institute burned in the spring of 1916, just 6 weeks before it was to close for the summer. Arrangements were made for the 7-11 grade to hold classes in the Little Vine (New Hope) Church while the lower grades were in the "Pierce Institute" (named for the family who had lived in the dwelling). Each student brought his own chair!

A temporary structure was created and called "Cow Barn" because of its resemblance to one, but it was used for two years.

In 1918 the new two story brick building was finished and became known as Reynolds High School. That fall a flu epidemic caused the school to close, but it was reopened in time to complete the school year. In the early 1920 smallpox epidemic school stayed open, but a vaccine was mandatory.

Students were allowed an hour for lunch and either walked home or brought theirs wrapped in newspaper or a paper bag. Lunch items included biscuits ...with sausage, ham, or syrup; baked sweet potatoes and gingerbread.

Principal Joiner is well remembered for his high expectations. Chapel was held every Friday morning. Students had to give memory verses and answer questions when called upon! His pet subject was Spelling and Reynolds High usually won the Spelling Bees held between county schools. Curriculum requirements were: 4 yrs of math, English/literature, history; 3 yrs of Science, Latin; or 2 yrs Latin and 2 Yrs French. Many going away to college were able to skip Freshman courses in math and English they were so well prepared.

Emory University offered a scholarship to the MALE High School Senior with the highest score on a Test they sent to the school. Mr. Joiner thought all should take the test, so had the girls use "male names"...but when the two highest scorers were girls, he had to confess!

Reynolds students took such pride in their school that an Alumni Association was active and met annually, intiating new gradutes in May each year. Students from all the classes returned from great distances.

Up through about 1956 RHS had all twelve grades in one building and was fed by two other elementary schools--one in Crowell and the other in Potterville. The school system couldn't afford to build a basketball gym so William Fickling built one for the school.

July 1965, the decision was made to consolidate with Butler High School. This was greatly opposed by some Taylor families who elected to send their children to the neighboring Peach County School.

Integration came in January, 1970. Mrs. Jewel N. McDougald, an outstanding black educator, served as principal for many years. The elementary school in Reynolds were integrated by race but were segregated by sex in those beginning years.

For more remembrances of school days, don't miss Bruce Goddard's Page under "Peachland Journal"...Pictures have a way of changing you. 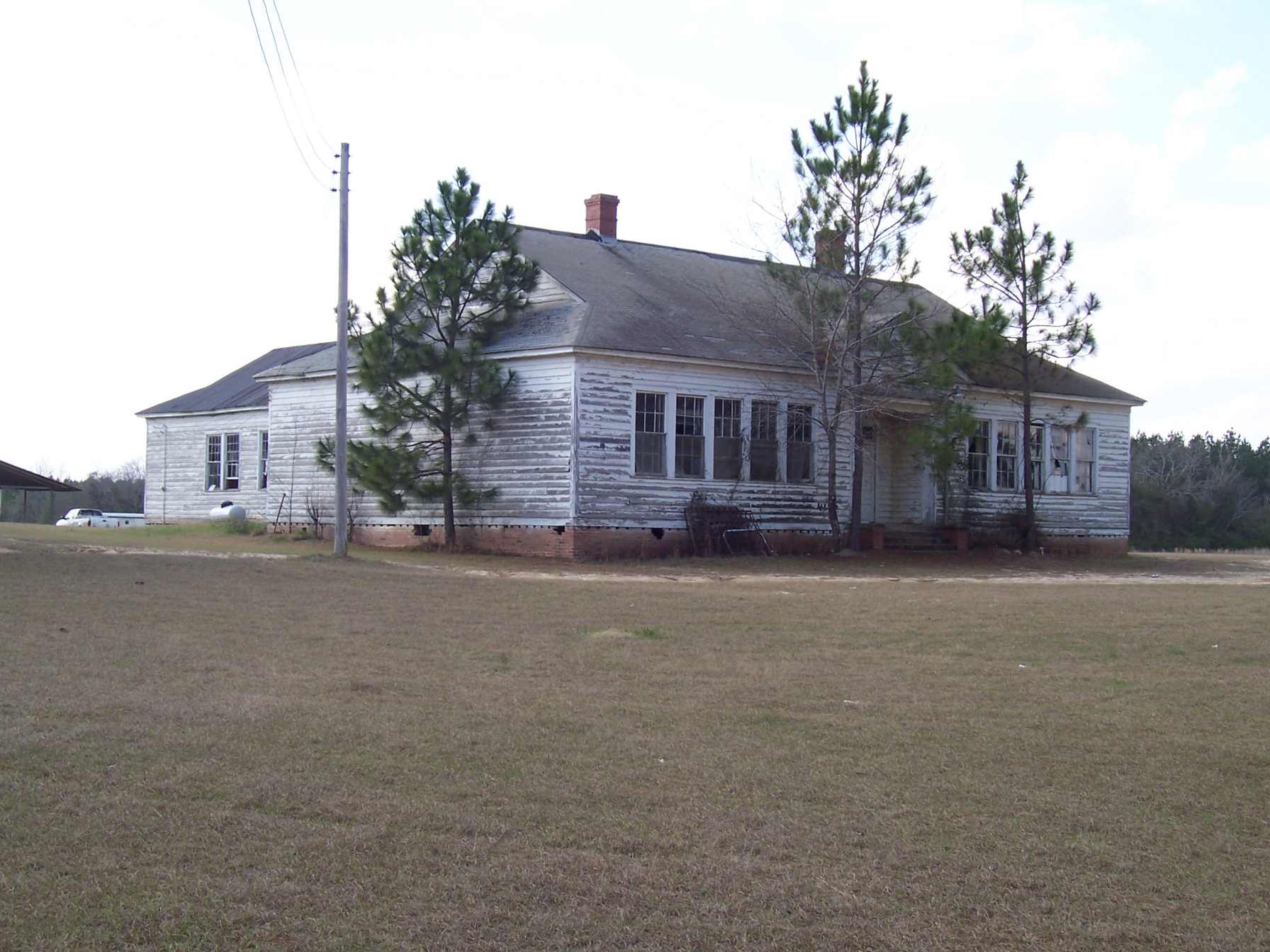 One of the early schools of Taylor County. Used in more recent times for family reunions and special occasion receptions. Need more history. Photo by Gerald Joiner who is very interested in this history. gerjoi@cox.net

Nancy Byrd donated the land for in exchange for having a log home built. That is the site of what later became known as Glover School.

From the "History of Reynolds, Georgia" Compiled by Reynolds Woman's Club, Bicentennial Edition, pg 27. "... had it's beginning on May 12, 1832 when four men and five women constituted themselves into a Primitive Doctrine Baptist Church. This church was located about eight miles Northwest of Reynolds (note: Reynolds wasn't formed until 1852) at Ariel in Crawford County which at that time included part of what is now Taylor County."

The Taylor Tracer Feb 1998 (Reprint)
The Butler Herald
Feb 22, 1898
The school house known as the Wainright School House, situated a few miles northeast of town near Fickling's Mill, was destroyed by fire late Sunday evening the 13th inst, supposed to have been the work of an incendiary. Miss Bessie Fickling had a very good school here. All the books, etc. let in the house were burned. The house was a good one and built several years ago by Dr. Neisler. Arrangements have been made and the citizens of the neighborhood we learn will soon have the house rebuilt at the old site.